Are Kindles losing the plot? 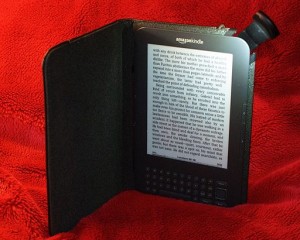 According to a research study highlighted in the Guardian last week, material which is read on an e-reader is more likely to be forgotten than that which is read from a normal book. To be more specific, the study found that readers find it harder to put the events in a novel into the correct order when they had read the novel on an e-reader. The authors of the study suggested that it was something to do with the way that an e-reader feels in our hands, compared to that of a book, which affected the reader’s ability to reconstruct the action accurately.

Before I go any further, I’ve got to say that I am completely (and unexpectedly) in love with my e-reader. As an English teacher, and as a lover of books in general, I very much expected to dislike digital books. But I’ve had a Kindle for a few years now and I absolutely wouldn’t be without it. I am, officially, on board with digital reading (What a surprising sentence for me to write!).

Having said this, there is definitely something different about reading a book on a Kindle. For a while, I felt that the novels that I read ended abruptly; even if all the loose ends of the plot were being tied up, I failed to notice the book drawing to a close. Without realising it, I had obviously always relied on the progress of the pages moving from my right hand to my left to tell me how far I was from the end of the book. It took me a long time to get used to the progress bar at the bottom of the kindle that effectively does the same job.

At first, I also found it difficult to press the ‘next page’ button at the right time. It sounds mad, but I used to press it before I’d finished the last few sentences of the page I was on. I thought I was just being odd, until several friends confessed that they often did the same. I can’t explain why – but I’ve certainly never prematurely turned the pages of a ‘real’ book…

I’ve mostly got over these little points (and let’s face it, they’re not terribly important anyway!). But my final problem with the Kindle is this: I miss seeing the book I’ve just finished sitting comfortably on my bookshelf. And this gives me my own theory for why people recall less of the plot from a digital book – it’s because we don’t have the physical presence to remind us of the book we’ve just read. It’s okay, though – I have a solution: for books that I’ve really enjoyed on the Kindle, I buy them in paperback as well. A decadent solution? Well, yes. But, for me, there’s something about books, and reading and literature, that makes it entirely justifiable.

In the News: Who are ISIS?
America’s Dilemma in the Middle East