In the News: Who are ISIS? 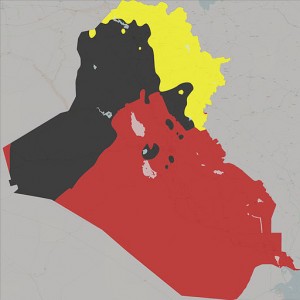 ISIS (black) have assumed control of a large swathe of Iraq, and are currently in conflict with Government forces (red) and Iraqi Kurds (yellow).

Like so much of the politics of the Middle East, the origins of the Jihadist group calling itself the Islamic State of Iraq and the Levant (currently more well known as ISIS), can be traced to the territorial settlements reached after the First World War, particularly the signing of the 1920 Sykes-Picot Agreement between Britain and France, which settled the current borders of Iraq and Syria to satisfy their own imperial interests in the Middle East but ignored Arab territorial aspirations. The creation of Iraq and Syria cut across the idea of a single, unitary Arab State, mirroring the Ottoman Empire, but on a secular, nationalist basis ruled by an urbanised Sunni-based middle class. Jihadists consider the national states organised on western constitutional lines as “false states”, creations of foreign imperialists. ISIS demands a revival of the caliphate, an Islamic empire under Sharia law and with no separation of religion and politics.

ISIS emerged from the ideology of “The Muslim Brotherhood”, recruiting its adherents as a result of American and British engagement in the Gulf Wars, which removed Saddam Hussein without constructing a viable civil society once troops were withdrawn from Iraq. Failiure to support rebels fighting Syria’s President Assad created a huge power vacuum in that country, which ISIS soon filled, attracting support from the Islamic Diaspora around the world.

ISIS now boasts of between 4 – 10,000 fanatics, well armed. Fighting only in Iraq and well supplied with money drawn from donations both collected in mosques and laundered from Islamic charities. It also enriches itself from the proceeds of robbery, extortion, kidnapping ransom money, and blackmail. In June 2014 it claimed to have an operational fund of $2 billion.

The group’s aims are firstly to remove all foreign influence from Islamic societies in the Middle East, and secondly to “purify” Islamic countries by forcing them to follow their draconian version of Islam. Thirdly, they wish to force conversion or death on minority Christian sects still living in the region.

In addition to all of this, ISIS have far-reaching imperialist ambitions – to force draconian purification on Islamic territories in East Africa, the Maghreb, and even to reconquer the lands of Muslim Spain. Further, they seek to extend their influence over the Islamic states of the Caucasus and Indonesia. They believe they have a right under the caliphate to rule all Islamic diaspora. Last but not least, they intend to “remove” the Shia population of Southern Iraq.

ISIS are proving themselves formidable, fanatic fighters, albeit against an admittedly rag-tag Iraqi “army” led by incompetents. But they are well equipped with surface-to-air missiles anti-tank weapons, field guns, rocket launchers, Scud missiles and anti-aircraft guns – all of it looted from abandoned American stockpiles.

Can they win? Probably not, as the caliphate is not an attractive form of government to the more or less secular urban Arab, and certainly not to the Kurds or Shia. Other groups in the Middle East, such as Hammas or Fattah, do not want to see their power, prestige, financial support, pensions and salaries subsumed into an all-embracing, draconian, anti-secular entity with its roots in the 14th century.

Fact and Fiction: the story continues…
Are Kindles losing the plot?