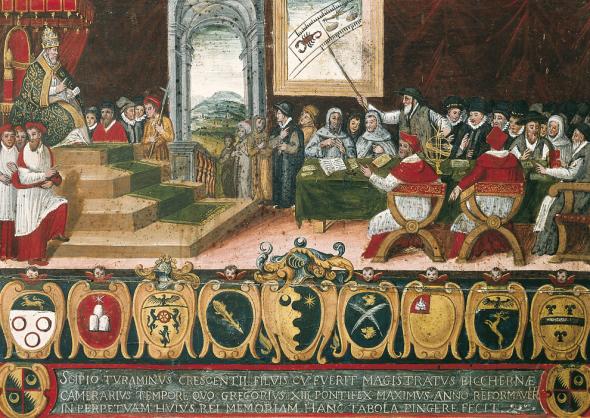 What Is The Gregorian Calendar?

What was wrong with the Julian Calendar?

The Julian calendar was imposed by Julius Caesar in 45BC, based on the rudimentary calculations of Greek astrologers and mathematicians. Like the Gregorian calendar, it’s a solar calendar, meaning it’s based on the Earth’s orbit of the sun, which it assumed to be exactly 365.25 days. It accounts for the extra quarter by including an extra day every four years known as the ‘leap day’. Actually, the Earth takes approximately 365 days, five hours, 48 minutes and 46 seconds (365.24219 days) to go around the sun. The overestimation of the Julian calendar meant the calendar gained a day every 128 years, so dates that corresponded to astronomical events such as the Spring equinox, were moving further and further away from their actual occurrence.

Why did it matter?

By shortening the Julian calendar by 0.0075 days, the Gregorian calendar stopped the drifting equinoxes, which although important from an astronomical standpoint was not the main reason for the reform. The Catholic church was concerned with these drifting dates because the Spring equinox is a determining factor for the date of Easter Sunday. The equinox, which is supposed to happen around the 21st of March, was happening much earlier and Easter celebrations were no longer in accordance with traditions outlined by the First Council of Nicaea in AD 325. To restore the association between Easter and the true Spring equinox, the reformed calendar jumped ten days; so in 1582, Thursday the 4th of October was followed by Friday the 15th of October.

How did it spread?

Initially, the calendar was adopted by Europe’s Catholic nations and their overseas territories, with Protestant and Eastern Orthodox countries following suit over the next three centuries. The increasing economic dominance of The West through colonial endeavours popularised the calendar across the rest of the world, with Greece being the last European country to adopt it (for civil purposes) in 1923.

Martin Luther King Jr.
How Great Was Elizabeth I?