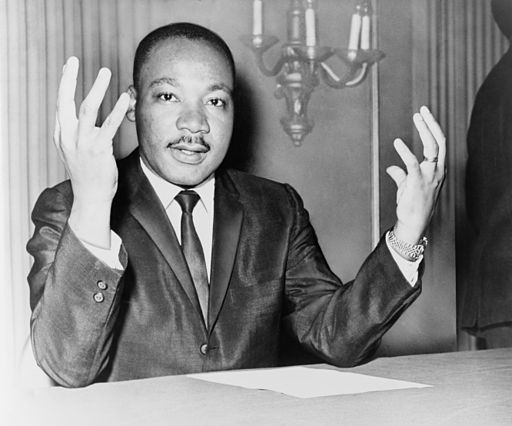 ‘’Life’s most persistent and urgent question is, ‘What are you doing for others?’’- Martin Luther King Jr., 1957.

Martin Luther King Jr.: a pinnacle of freedom fighting and passion for cause. In 20th century America the civil rights movement came to a turning point when MLK, an African-American baptist minister, became the forefront of the movement.

King was born Martin Luther Jr., on the 15th January in 1929, and was one of three children. Brought up in a religious home, where he was taught that it was his ‘’Christian duty to love everyone’’, King witnessed his father stand up against segregation and other forms of discrimination, telling King that ‘’ I don’t care how long I have to live with this system, I will never accept it.’’

In High school King quickly became known for his public-speaking ability, proceeding to join the school debate team. On April 13th 1944, in his junior year of high school, he gave his first public speech during an oratorical contest, stating that ‘Black America still wears chains. The finest negro is at the mercy of the meanest white man. Even winners of our highest honours face the colour bar’. King was selected as the winner of the contest.

In March 1955, Claudette Colvin—a fifteen-year-old black schoolgirl in Montgomery—refused to give up her bus seat to a white man in violation of Jim Crow laws – local laws in the Southern United States that enforced racial segregation.

Nine months later on December 1, 1955, a similar incident occurred when Rosa Parks was arrested for refusing to give up her seat on a city bus. The two incidents led to the Montgomery bus boycott, which was urged and planned by Nixon but led by King. The boycott lasted for 385 days. King was arrested during this campaign, which concluded with a United States District Court ruling in the case of Browder v. Gayle that ended racial segregation on all Montgomery public buses. King’s role in the bus boycott transformed him into a national figure and this event highlighted him to be best-known spokesman of the civil rights movement.

I still have a dream, a dream deeply rooted in the American dream- one day this nation will rise up and live up to its creed, ‘’We hold these truths to be self-evident: that all men are created equal.’’ I have a dream…

On August, 28 1963 King delivered a public speech, which became known as ‘I Have a Dream’ during the march on Washington for Jobs and Freedom. The speech was so powerful it was seen that ‘’with a single phrase, Martin Luther King Jr. joined Jefferson and Lincoln in the ranks of men who’ve shaped modern America’’

It was a characteristically powerful moment, one that has gone down in history, and it has remained equally as famous as the speaker himself.

Being A Mature Student During The Pandemic
What Is The Gregorian Calendar?