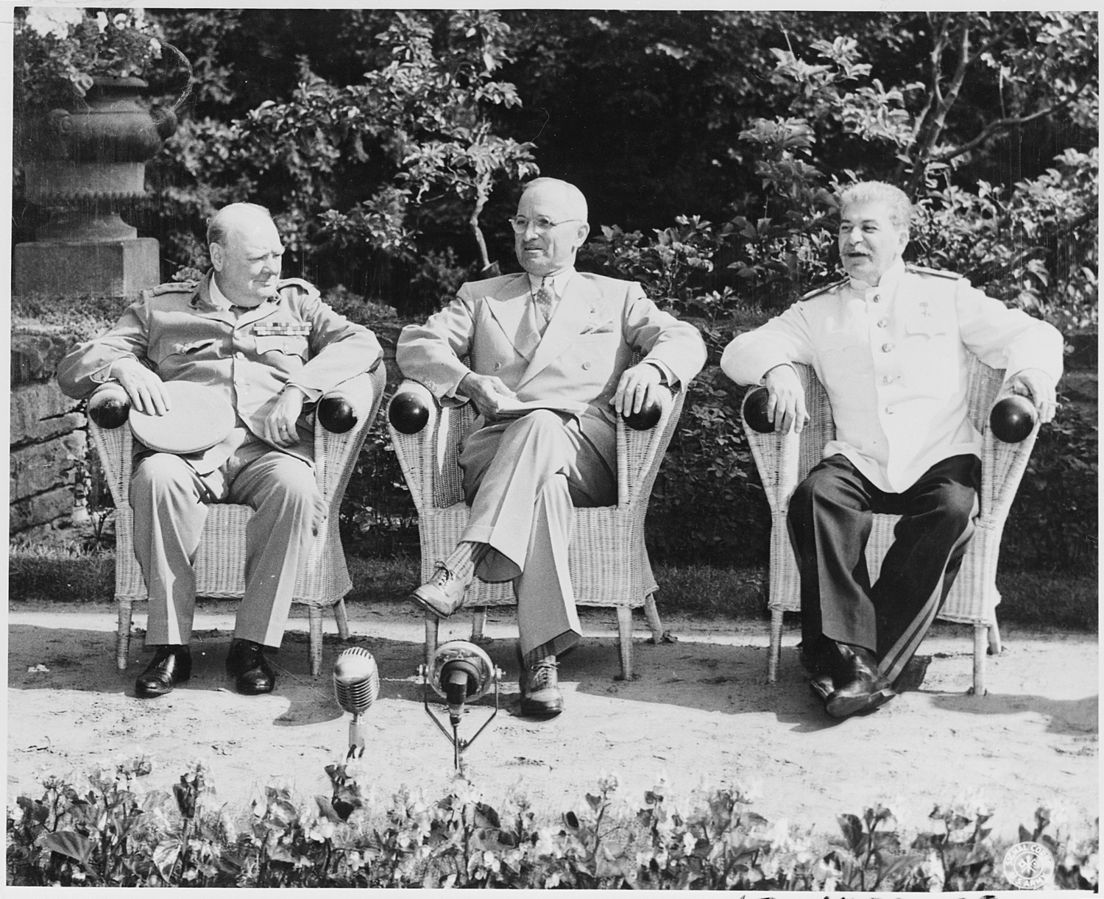 The Potsdam Conference, 75 Years On

75 years ago, this week, the “Big Three” – the UK, US, and the Soviet Union, met in the German town of Potsdam for a conference. Their goal was to talk about Germany and how they would deal with the country, after it had signaled the end of world war two by giving an unconditional surrender 9 weeks earlier.

For any students of GCSE or A-Level history, Potsdam is worth knowing about because historians believe that this conference sowed the seeds for the Cold War between the US and the Soviet Union. In this article, we’ll delve a bit deeper in Potsdam and its historical significance.

Potsdam wasn’t the first time that the Big Three had met to discuss what the post-war world might look like, however. They had met five months earlier in the Black Sea resort of Yalta, in the Soviet Union, but a lot had happened since then. Here’s what you need to know:

When they met in Yalta the war was still raging on both fronts and Germany was nowhere close to surrendering. Also significant was the fact that Franklin D. Roosevelt was the US President that attended Yalta, but had died before Potsdam, and been replaced by Harry S. Truman. While Roosevelt had been keen to work with Stalin and foster a positive relationship, Truman wasn’t quite as accommodating towards his Communist rival.

There had been leadership changes in the UK since Yalta, too. Winston Churchill was out, replaced by Clement Atlee. This happened halfway through the conference (Thus, the picture above includes Churchill on the left, Truman centre, and Stalin on the right ).

Stalin had promised at Yalta to allow free elections in Eastern European countries, but had not actually held true on this promise, and the situation seemed unlikely to change in the future.

Just before the Yalta conference began, the US successfully detonated an atomic weapon for the first time. Truman kept this a secret from Stalin, telling him only that the US was in possession of a “new weapon.” The Big Three had promised not to keep secrets from each other, so this upset Stalin and fostered a level of mistrust.

Despite these changes, Potsdam did not deter the Big Three from looking towards a real and lasting peace settlement. Germany had already surrendered, and Japan was well on the way, or so they hoped. So, what did these three men want the post-war world to actually look like?

Firstly, they decided to divide Germany into four zones, with each zone run by a different power. The city of Berlin was divided in a similar manner.

Secondly, they discussed the issue of reparations. All three wanted Germany to pay for the damage that she had caused, but there were disagreements about the exact amount. Truman, for example, did not want Germany to go into financial collapse because making the German people angry and upset might make them cling on to Nazism. Remember: the goal of Potsdam was the “denazification” of Europe. Reparations were, however, decided by the end of the conference.

Thirdly, some borders were readjusted to ensure that lost territory could be regained. Poland, for example, gained German territory to make amends for the land it lost to the Soviet Union.

How did the Potsdam Conference lead to the Cold War?

The keyword here is tension. As we have seen, changes in leadership and a desire for territorial gains in the post-war world meant that the relationships between the Big Three leaders were now characterised by tension and ambition, rather than honest cooperation. Truman’s handling of Stalin over the atomic bomb, for instance, was a real turning point in US-Soviet union relations because the men were now pitted against one another as rivals in an arms race, and this would overshadow their relationship for the coming decades.

Crisis Schooling: Studying in Yemen’s War Zone
Why We Need The Arts Now More Than Ever