Focus on Ukraine: The Land of too much History 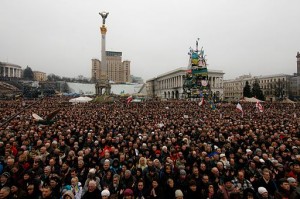 A main topic of news in recent weeks has been the problems being experienced in the Ukraine. Historically, Ukraine is not new to such difficulties or interventions, as this article aims to explain, along with several others to come.

Ukraine has been fought over throughout its history. Its most enduring and troubled relationship has been with Russia. For the Tsars, the Ukraine was the heartland of the medieval Rus and the embodiment of Slavic culture. But it is a land deeply divided by economy, geography, traditions and ethnicity. Western Ukraine consists of rich farmland, its black earth seen as the bread basket of Russia. Eastern Ukraine has important deposits of coal, and the country is in the centre of Russia’s aerospace industry. Ukraine provides the ports for the Russian surface fleet, too, and there are a number of important military bases in the region.

The 19th century saw the growth of a nationalist movement in Ukraine, together with the growth of urbanisation and industrialisation in the east. In the first world war the country managed to fight for both the Central powers and Russia. This took its toll, and by the time the Bolsheviks established their hold over the country in 1921, over 1.5 million Ukrainians had died.

By 1932, the Soviet Union, facing economic catastrophe at home and hostility in Europe, embarked upon a policy of agricultural collectivisation and this time enforced industrialisation. Executions, the burning of villages, and deportation of Kulaks to the gulag spread through western Ukraine, driven by the ideological zeal of Stalin’s NKVD commissars. Collectivisation was followed by the Great Terror of 1937 – 38, which succeeded in killing off the Ukrainian intelligencia.

In June 1941 Hitler invaded Ukraine. German troops were welcomed with bread and salt and the Ukrainian Liberation Army was formed to fight with the invading troops. But the hopes of the Ukrainian nationalists were betrayed. Collectivisation was retained and food shipped back to Germany. At the end of World War Two, 5-9 million Ukrainians had been slaughtered.

Stalin died in 1953 and Kruschev attempted reconcilliation. But in 1986 disaster struck again when 2.2 million acres of land was contaminated by the Chernobyl Nuclear disaster.

In 1991 the Ukrainian Parliament finally passed an Act of Liberation, supported by over 90% of the population. But the economy went from bad to worse with the Ukraine defaulting on oil and gas payments in 2006 and 2009, and corruption endemic – elections were rigged. As far as Russia was concerned the final showdown came in November 2013, when Ukraine demanded intergration into the EU. In March 2014, Russia mobilised troops in response to the Russian-backed president’s request for support. Ukraine has remained in semi-revolt and been ungovernable ever since. The division between east and west Ukraine remains unresolved, economic relations with the EU is a pressing problem. Neither the Russian government nor the Ukrainian Parliament appear to be able to work within democratic norms. And America appears to view Eastern Europe as an extension of the American frontier.