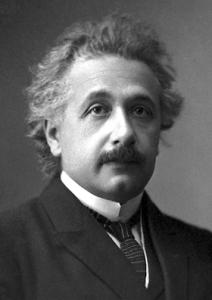 This Friday sees the anniversary of the birthday of one of history’s great scientists. As such, he is surely due an article to take a look back over his life and career.

Albert Einstein was born on March 14th 1879 at Ulm, Wurttemberg, Germany. He attended elementary school at the Luitpold Gymnasium in Munich, but he was not happy and struggled with the regime. He enjoyed classical music and played the violin.

In 1889 a Polish medical student, Max Talmud, frequently visited the family and became a tutor to Einstein, introducing him to higher mathematics and philosophy. As a result of one of the books he was introduced to, Einstein began to wonder what a light beam would look like if you could run alongside it at the same speed. If light were a wave, then the light beam should appear stationary. Yet, in reality, the light beam is moving. This paradox led him to write his first scientific paper at 16, “The Investigation of the State of Ether in Magnetic Fields.”

In 1894, the family moved to Milan, Italy. Einstein subsequently renounced his German citizenship to avoid military service and enrolled at the Swiss Federal Polytechnic School in Zurich.

Finding it difficult to get employment, Einstein tutored children, until 1902, when the father of his friend, Marcel Grossman, recommended him as a clerk in the Swiss patent office in Bern. Einstein married Maleva Maric in1903. In May, 1904 they had their first son, Hans Albert, and then a second son, Eduard in 1910. He divorced in 1919 and then married Elsa Löwenthal in the same year.

Whilst studying James Maxwell’s description of the nature of light, Einstein discovered that the speed of light was constant, which conflicted with Isaac Newton‘s laws of motion, and it was this realisation that led Einstein to formulate the principle of relativity.

In 1905 he submitted a paper for his doctorate at the Polytechnic Academy in Zurich and in the same year published four papers in the physics journal, Annalen der Physik. These were the Photoelectric Effect, Brownian Motion, Special Relativity, and the Equivalence of Matter and Energy E=mc2.

Einstein subsequently went to the University of Berlin, as director of the Kaiser Wilhelm Institute for Physics from 1913 to 1933.

In November 1915, Einstein completed the General Theory of Relativity, which he considered correct because it accurately predicted the perihelion of Mercury’s orbit around the sun, which fell short in Newton’s theory. This theory also predicted a measurable deflection of light around the sun when a planet orbited nearby, and it was confirmed by observations made by Sir Arthur Eddington during the solar eclipse of 1919. In 1921, Albert Einstein received the Nobel Prize for Physics for his explanation of the photoelectric effect, rather than his work on relativity, which was considered controversial.

In December, 1932 Einstein decided to leave Germany because of the Nazis. He took a position at the Institute for Advanced Study at Princeton, New Jersey, becoming a U.S. citizen in 1940. He also helped with charities working with refugees arriving from Germany.

In the summer of 1939, Einstein became aware of Germany’s success with the fission of the Uranium atom and wrote a letter to President Roosevelt to alert him of the possibility of a Nazi bomb. Roosevelt invited Einstein to meet with him and this led to the Manhattan Project.

Balancing Britain’s Economy
Focus on Ukraine: The Land of too much History