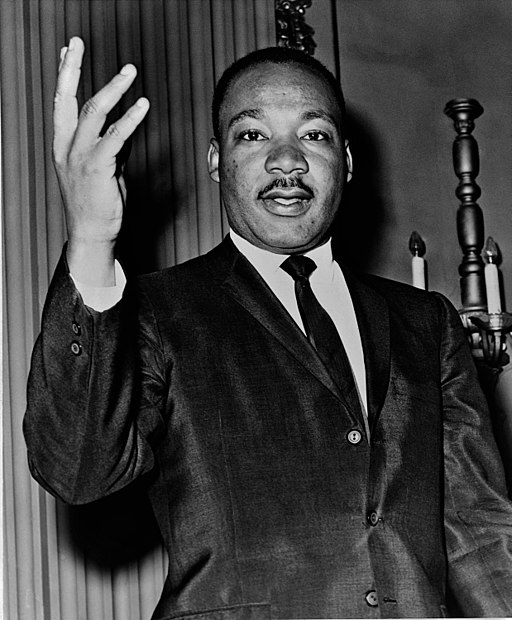 On the 5th April 1968 the civil rights protester Martin Luther King, Junior was supposed to lead a protest march in support of striking garbage workers in Memphis, Tennessee, USA. It was a march he would never make, however. The evening before, he was assassinated while standing on the balcony of his hotel room.

During his lifetime (January 15, 1929-April 4, 1968) Martin Luther King had a tremendous impact on the struggle by the black population of America and the western-world as a whole, to be recognised as equal to the white majority. The most important factor of his campaign was his insistence on peaceful protest. No matter how violent the resistance of his oppressors and those who stood against him was, King believed that reasoning and discussion were more powerful tools with which to fight back.

Records left by King describe how he encountered his first personal act of discrimination when he was six years old. He and his white friend were not allowed to go to the same school, as education between black and white people was strictly segregated. The event that stuck with King the most from his early years though, happened when he was fourteen. He had just won a speech contest about equal rights when, on the bus ride home in Georgia, he was forced to give up his bus seat for a white passenger. Humiliated by this experience, he made powerfully determined to campaign for mankind to be equal.

Martin Luther King (originally christened Michael) came from a religious background. In 1954 he followed in the footsteps of his grandfather and became a church pastor. In charge of the Dexter Avenue Baptist Church in Montgomery, Alabama, King combined his work there with his growing responsibilities within the racial civil rights movement. By 1954 he was a member of the executive committee of the National Association for the Advancement of Coloured People, and in December of the following year the leader of the first Negro nonviolent demonstration in the United States. This group, which followed King’s non-confrontation policy, was born of another infamous incident in December 1955 involving a black woman named Rosa Parks. Parks, a black woman from Montgomery, was arrested for refusing to move from her bus seat so a white man could sit down. It was decided that a bus boycott by all black people in the region would take place, and King was chosen to lead it – a campaign which lasted 381 days.

With the black population avoiding buses, the revenue taken by those running the bus service in Montgomery, Alabama. dropped sharply and so the government had to act. In 1956 the US Supreme Court ruled that Montgomery’s bus segregation policy was unconstitutional. It was this ruling that made King’s name as a major civil rights campaigner. Even though during the long boycott King’s home had been bombed and he’d been arrested, he stayed firm and refused to give up. On the heels of this success, King was elected president of the Southern Christian Leadership Conference in 1957. Combining his religious beliefs with the ideals of peaceful protest that he so admired in Gandhi, King continued to campaign. His work now took him across the globe, so he could talk to as many influential figures as possible to further the push for equality.

In 1963, King focused his attention on one of the most segregated areas of America, Birmingham, Alabama. He organised the implementation of boycotts and peaceful protests against black segregation. During the campaign the demonstrators remained peaceful, but the city authorities used extreme action to break up the protests. King was imprisoned, and while in jail he wrote the “Letter from Birmingham Jail” which was a plea for the continuation of non-violent campaign over the use of force. So shocking was the televised coverage of the events in Birmingham, that rather than damage the civil rights movement, it won it respect. Shortly after it ended, King was invited to the White House to meet President Kennedy.

On 28th August 1963, Martin Luther King delivered his famous, “l Have a Dream”, speech while marching on Washington to campaign for the black community’s right to jobs and freedom. His words were so powerful that they are still iconic today.

Although King didn’t remove racial prejudice, his work made a massive impact in bringing global attention to the problem. If he hadn’t been killed in 1968, he would almost certainly have gone on to achieve more breakthroughs for the civil rights movement.

In his short lifetime Martin Luther King became a global icon for peace and tolerance. During his campaigns he was assaulted four times, arrested on more than twenty occasions, and had his home blown up. In contrast, King was Man of the Year by Time magazine in 1963. He also became the then youngest person to ever win the Nobel Peace Prize. Martin Luther King’s most lasting contribution was the amount he achieved for the betterment of the black population while employing only argument, speeches and peaceful demonstrations. He left a legacy which shaped the civil rights movement, changing it from an disorganised number of groups which often physically fought back against those who oppressed them, to a movement which brought greater equality to America via peace.