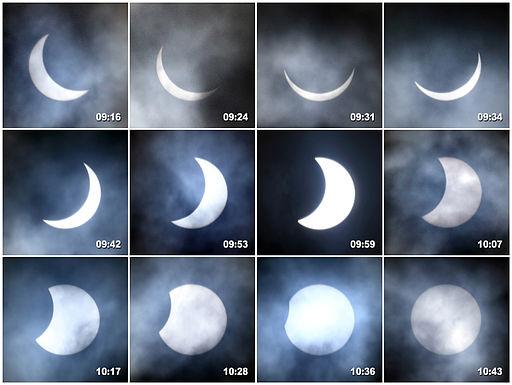 We have just had a partial solar eclipse, with the next one due here on 12th August 2026 and the next total eclipse on 23rd September 2090. This occurs when the Moon passes across the disk of the Sun so that the shadow of the Moon sweeps over the Earth’s surface.

Meteorologists have been gathering data during this month’s eclipse to find out if a solar eclipse has an effect on the weather. There have been lots of reports through time that the clouds have cleared suddenly allowing an eclipse to be seen and the question remains whether or not some cooling from the eclipse allows clouds to dissipate in a way similar to the effect seen at sunset. Perhaps we will get an answer to this soon.

So how have eclipses been treated through time? Records show that the Babylonians and the ancient Chinese were able to predict solar eclipses as early as 2500 BC, but eclipses were not understood until comparatively recently.

In ancient China the eclipse was seen to predict the future of the emperor, and more than 4,000 years ago, two Chinese astrologers were executed for failing to predict a solar eclipse. Although early eclipse pioneers, including Chinese astronomer Liu Hsiang, Greek philosopher Plutarch and Byzantine historian Leo Diaconus tried to describe and explain solar eclipses and their features, it was not until 1605 that astronomer Johannes Kepler made a scientific observation of a total solar eclipse. He also developed mathematical laws for planetary motion. This was the time that we came to understand the basics of what was going on in our solar system. However, until Kepler, cultures had come up with a variety of explanations to try and understand why the Sun temporarily vanished from the sky.

Some of these reasons given were based on the Sun being eaten. In Vietnam, people believed that a giant frog was devouring the Sun, while Viking cultures blamed wolves for eating the Sun and causing a solar eclipse. In ancient China, a celestial dragon was thought to lunch on the Sun and according to ancient Hindu mythology, the deity Rahu, was beheaded by the gods and his head flew off into the sky and swallowed the Sun, causing the eclipse. People in many cultures have also been seen to have shared the act of getting together to bang pots and pans and make loud noises during a solar eclipse. It was thought that making a noise would scare away those creatures devouring the Sun. It is surprising that these eating based ideas would survive for any amount of time, as you would surely question them when the Sun reappeared as normal, or maybe you thought banging your pot saved the Sun.

There have been other ideas apart from the Sun being eaten, though. The ancient Greeks believed that a solar eclipse was a sign of angry gods and that it was the beginning of disasters and destruction whereas Korean folklore suggested that solar eclipses happened because mythical dogs were trying to steal the Sun.

Maybe these myths will vanish eventually, as there will be many more eclipses. However, the moon is moving away from the Earth by a few centermetres per year. This means that eventually the moon will have moved too far away to produce an eclipse – but not for 600 million years!

The Rebirth of Richard III
The British Economy: Sinking or Swimming?