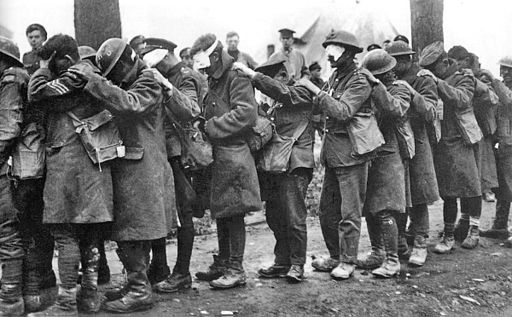 Shell Shock in The Great War

The future Lieutenant Colonel, British spy, Military Cross recipient, veteran of two world wars, and noted London eccentric Alfred D. Wintle was just a teenager when, in 1916, he saw action in the Great War. During his first night on the Western Front the sergeant to whom he had just been introduced was hit by a shell and killed, showering the young soldier with his remains. Wintle stood immediately to attention, so the story goes, and as shells continued to fall around him he saluted. This ‘miraculously did the trick,’ he would later write, ‘Within thirty seconds I was able to become again an Englishman of action and to carry out calmly the duties I had been trained to perform.’ It was a harrowing experience far from rare among soldiers who fought in the trenches. However, for many of these others, the repercussions were very different.

Confronted with similar experiences of untold horror on a daily basis, many ordinary soldiers suffered psychological breakdowns that reduced them to shaking shells of human beings. The condition became popularly known as shell shock – war neuroses to the medical profession and now considered a predecessor of the Post-Traumatic Stress Disorder seen in many combat veterans today – and the British army alone reported 80,000 cases during the four years in which the war raged.

You’ve probably seen the disturbing images of soldiers with thousand-yard stares, or perhaps footage from the documentary War Neuroses (link to view below), made by Dr. Arthur Hurst in 1917, which gives a first-hand account of shell shock sufferers and their treatments. Symptoms ranged from the invisible, like insomnia and memory loss, to the physical, in which sufferers were rendered unable to stand or speak. Whatever the manifestation, as the American doctor Thomas Salmon later put it, shell shock was a psychological escape ‘from an intolerable situation in real life to one made tolerable by the neurosis.’

Victims were not immediately treated with understanding and sympathy.

Shell shock was seen by many in the military as a cowardly excuse to escape the terrible conditions of the front, and frequently they were disciplined or charged by court martial for cowardice or desertion. One such soldier, Private Harry Farr, was executed for cowardice in 1916 despite a prior shell shock diagnosis. The generals and politicians sitting safely behind the lines demanded a level of “manly” mental toughness that simply could not be met by the men experiencing the horrors for themselves. There is no wonder that Virginia Woolf would later famously label the war a “preposterous masculine fiction.”

Even though we may think of the First World War as an event dominated by men, women were not immune to its mental stresses. One famous case was that of the Voluntary Aid Detachment nurse Vera Brittain, who later wrote about her experiences in the first volume of her autobiography, Testament of Youth. Along with thousands of other women who served as nurses and ambulance drivers on or near the front, she made a psychological sacrifice that haunted her for the remainder of her life.

As we come to commemorate 100 years since the bells of peace rang out across Europe, let us remember not only the brave dead, but also the psychologically shattered who lived with the mental scars of the war long after its conclusion.

Grouped on Ability: Are Sets Helpful or Harmful?
The Benefits of Being a Mature Student