Redressing the balance 1 : An inclusive history of Mathematics

When writing my blog series on famous mathematicians I was struck by the fact that most of the famous names we know from the history of mathematics belong to men from the West. The mathematics studied at GCSE and A level is full of theorems, rules and numbers (Pythagoras, Fibonacci, Descartes to name but a few) credited to European men. So where are the people from other cultures and where are the women? In this series I hope to redress the balance a little by looking at the lives and contributions of some female mathematicians and at a more global history of mathematics by considering the achievements of Chinese, African, Arab and Indian mathematicians.

Why is mathematics history biased? 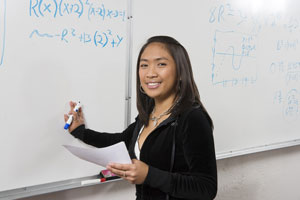 Mathematics history is like any other history it relies on researching the accounts etc of people from the past. Most of the great works that have survived have been by men from the West.  Up until the twentieth century there appears to have been a prevailing belief that nothing of any import can have been developed outside of the West. This does not mean however that areas mathematics was not being discovered and developed in other parts of the world. Today writers such as Jim Alkhalili are seeking to redress the balance and research contributions from all over the world.

It is also worth remembering that education for all is a relatively new phenomenon. Girls in particular have not historically had the same access to mathematics education as boys. Those girls who did receive a secondary education were often from the aristocracy and many of those were married and expected to be having children at about the age when they could have been making mathematical discoveries.  Some women have made it into our history books however – they are generally either women who were the daughters of mathematicians or who had teachers who were mathematicians.

Whilst it might seem obvious in principle that mathematicians come in all shapes and sizes there is still a prevailing belief that maths is really just for boys from a certain background. Even today people I interact with as a Distance Learning Tutor and as a Mathematics Consultant say to me I don’t look or sound like a mathematician (and I have to admit I take that as a compliment!) A greater understanding of the contributions of a wide variety of people to mathematics development might help a little in the fight against such ingrained beliefs and enable more people to achieve their mathematical potential.