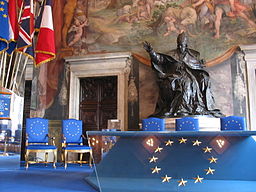 The 1957 Treaty of Rome laid the foundation for closer union between the national states of Europe. Since that date, Poland, Romania, Croatia and Bulgaria have joined the EU. For over 50 years, peaceful co-existence has been the norm between the member states. The EU has seen the living standards of its population rise, and recovery from the recent recession is slowly gathering pace, albeit at different rates in different countries. British financial trade and manufacturing exports have benefited from our membership of the union, whilst avoiding the pit-falls of the Euro currency. So, given the fragile nature of the recovery, is this a sensible time to resign from the club?

Pressure groups such as UKIP and Jean-Marie Le Pen’s National Front in France, argue that it is, and in the recent EU elections, they were supported by 27% of their country’s electorate. In Britain, David Cameron has promised an in or out referendum in 2017. Why the angst?

Firstly, the growth of nationalism of the type common in almost every period of economic depression is a key factor. Jonny foreigner is always the first to be blamed in such times. The French right rallied against the incursion of Jewish and Russian emigres in the two decades before the first World War. Germany did the same in the 1920’s and 30’s. Today, loss of national identity and sovereignty are crucial factors in the dislike of a centralised European plutocracy. Secondly, immigration is a powerful motive. Particularly amongst the working class and pensioners.

There are two broad solutions to this problem. Both are easy to articulate but extraordinarily difficult to implement in practice, and the time available to the mainstream political parties is short. The first solution involves stimulating economic growth by every means possible. The second solution would be to retreat from aggressive federalism.

The solution of stimulating the economy for growth implies far less red tape, the liberalisation of employment law, and the stimulation of investment and consumption. In the Euro-zone a start has been made with the introduction of negative interest rates – in affect a fine on banks for hoarding money.

The second solution involves a retreat from the ideal of further federalist integration. The charge is being led by Cameron supported by France, Sweden, Denmark and Italy, with Greece, Spain and Portugal in favour. But the UK faces massive political difficulties. UKIP retains its electoral strength and Germany is unconvinced.

Finally, there is the immediate problem of who will lead the EU: Jean-Claude Junker or the pragmatist Christine Lagarde, head of the IMF?

Watch this space. This debate is only going to get more heated between now and 2017.

Fuelling the flames: (Russia’s?) Crimean OIl
Covering up the Lusitania