Covering up the Lusitania 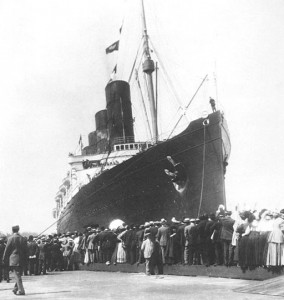 The Lusitania docked in New York City, 1907, prior to her maiden voyage.

The RMS Lusitania, a British passenger liner, was launched by the Cunard shipping line in 1907 to revive the transatlantic passenger business in the face of German competition. At the time, Germany held a monopoly by offering a faster, more luxurious voyage, with twice as much passenger space, electric lighting in the cabins and ship-to-shore wireless communication.

In 1915, there was a submarine war beneath the Atlantic, and it was intensifying. Germany had  declared the seas around the British Isles a war zone, in retaliation to Britain’s declaration of such in the North Sea the previous winter. Further to this, the German ambassador to the US, mindful of the dangers of confrontation with America, placed an advert in their press, warning Americans not to travel across the Atlantic. The prospect of a tragedy was there.

On 7th May, 1915, the worst came to pass. The Lusitania was torpedoed by a German U-Boat 18km off the southern coast of Ireland, inside the area designated as a “war zone”. The British reacted with horrified indignation, as did the American public, accusing Germany of firing on a non-military ship without warning, a violation of international law in that it had broken “Cruiser Rules” which attempted to provide some protection for civilians in the event of a ship being sunk or captured in time of war. Some 128 American lives were lost. Most tellingly, the sinking of the Lusitania would have a strong influence on America’s decision to join the war against the axis powers in 1917.

There may or may not be another side to the tragedy, however. The truth of the matter is impossible to be sure of, but there may have been circumstances that made the sinking more inevitable than might be first thought.

Germany accused the British Admiralty of using a civilian passenger ship to carry war materials, which she argued made it a legitimate target. Britain vehemently denied these charges and mounted a smear campaign.

A subsequent Admiralty Board of Enquiry provided strong evidence that such materials were being carried, however. The ship’s manifest listed 1200 shell cases, 18 cases of non-explosive fuses and over 4,000 rounds of rifle cartridges, plus aluminum powder and gun cotton. None of these items were listed in the cargo manifest, though, and all were used in the manufacture of explosives. Salvage operations in the 1980’s have now, in fact, confirmed Germany’s accusations.

There is also strong circumstantial evidence of a cover up. Signals between the Admiralty and the Lusitania were not made available to the board of enquiry and records were incomplete, with paragraphs and pages of reports going missing. No destroyers provided escort as the Lusitania entered the war zone, despite a number being at anchor in nearby harbours. A few weeks before the sinking, Churchill, as Secretary for War, had advocated enticing neutral shipping into the war zone in the hope that America would enter the war on the Allied side.

In hindsight, it may be seen that the Lusitania is another case of a wartime grey area, with both sides to be found with blood on their hands, whatever their respective arguments.

Re-booting the European Union
Hollywood and the American Depression