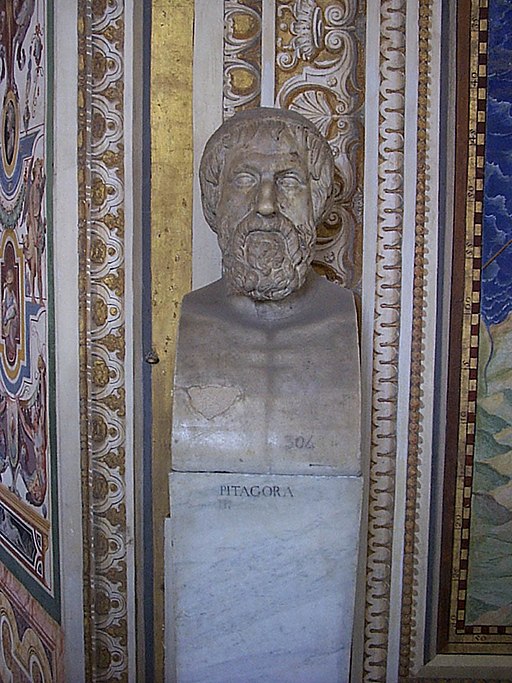 Pythagoras – From Theorem To Spiritualism

Think of Pythagoras and you’ll probably recall studying his theorem at school, where a right-angled triangle the sum of the squares on the other two shorter sides equals the hypotenuse squared. The theorem is believed to have been known to the Babylonians 1000 years earlier, but the Greek Philosopher and mathematician may have been the first to prove it.

In the field of Mathematics, Pythagoras’ work led to great leaps forward in our understanding of numbers and geometry, and of importance in many other branches of mathematics, including trigonometry.

Pythagoras was taught mathematics by ancient Greek Philosopher Thales, who brought the subject to the Greeks from Ancient Egypt, and by Anaximander, who was an earlier student of Thales. He was founder of the Pythagorean brotherhood, a group devoted to the study of mathematics.

Pythagoras was certainly not an ordinary mathematician, by any means. He believed that science and religion were connected. It is thought that he believed that he had already lived four lives, all of which he could remember. Others claimed that he was able to travel through space and time and could talk to plants and animals.

His work linked his subject with the universe at large. Pythagoreans believed that everything could be reduced to numbers, that the whole universe had been built using mathematics. They said the truth behind the everyday reality we experience lies in numbers.

A Theorist For Everything And Everyone

Modern-day physicists who seek the ‘theory of everything’ or the ‘grand unification’ are Pythagoreans. They subscribe to the thought that the universe can be completely understood through mathematical equations, and they are committed to a quest to find these equations. To Pythagoreans 10 was the supreme number, as it can be made by adding the first four numbers, 1,2,3 and 4. These numbers form a tetractys – the perfect, equilateral triangle.

Pythagoreans also used science in the areas of mystery and spiritualism. Their beliefs were based on the power of numbers. The monad (a unit), spoke of the birthplace of all things, and the number two, the dyad, referred to matter. The number seven was considered sacred because it was the number of strings on a lyre, the number of planets, and the seventh day of the Greek calendar was sacred to Apollo, all the feasts were celebrated on the seventh of the month.

Pythagoras also recognised the healing powers of music. He thought it was possible to align the souls to their perfect nature, and through music he performed what he called ‘soul adjustments’. He was the first person to prescribe music as medicine.

Widely considered as the ‘father of philosophy’, Pythagoras’ teachings, theories, philosophies and  life’s work show that he was truly an outstanding polymath, and his learnings and teachings made him one of the greatest thinkers of his time.

What Are Polymaths And How Can We Learn From Them?
How Podcasts Help Learning