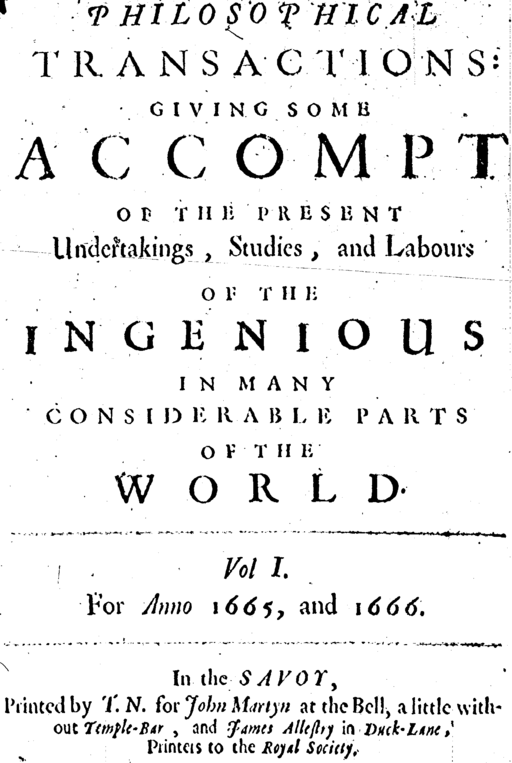 Philosophical Transactions – The Importance of the Scientific Journal

In 1662 a charter was granted by King Charles II allowing the creation of the ‘Royal Society of London for Improving Natural Knowledge.’ This scientific centre, now famous for its annual Christmas lectures, was created to further the understanding of the world, and to provide a platform from which to share science with the general public.

On 6th March 1665, King Charles’ charter was extended to allow the publication of the very first scientific journal; Philosophical Transactions. Created from an idea of the society’s original editor and secretary, Henry Oldenburg, the journal gave the scientific community the chance to share knowledge and stimulate debate in an attempt to extend their knowledge across Britain and the wider world.

Unlike scientific books, which are written as fact, often detailing an individual’s ideas and personal convictions, a journal opens scientific discoveries and new techniques to scrutiny and comment. As The Royal Society explains, “Philosophical Transactions established the important principles of scientific priority and peer review, which have become the central foundations of scientific journals ever since.” Such was the extent of scientific discovery by 1886, the Royal Society found its journal was too small to keep up with the passion Britain had for understanding the world around them. Consequently, the journal was split into two publications, Philosophical Transactions A and B. Journal A covered the physical sciences and Journal B concentrated on life sciences.

In the modern world, scientific journals are the backdrop of all scientific research. Written by qualified scientists, researchers and professors rather than authors or journalists, they present points of view, progress reports and studies, covering every aspect of experimentation and discovery. The majority of contributors to such journals are unpaid for their papers, yet publication is a requirement of any funding body so that scientific experiment can continue. Journals act as a check and measure that progress is being made.

With thousands of different journals now available, there are specialist publications of every facet of the discipline. From the most well known, such as Nature and The New Scientist, to countless more niche papers, each and every article since the dawn of the twentieth century has one thing in common: They are all peer reviewed.

As Science Based Medicine explains, “Peer-review is a critical part of the functioning of the scientific community, of quality control, and the self-corrective nature of science. The basic criterion is that there is a formalised process of peer-review prior to publication – so this presents a barrier to publication that acts as a quality control filter. Typically, the journal editor will give a submitted paper to a small number of qualified peers, being recognised as experts in the relevant field. The reviewers will then submit detailed criticism of the paper along with a recommendation to reject, accept with major revisions, accept with minor revisions, or accept as is.”

This process of quality control is essential in science. It ensures high standards are maintained and that the experiments being reported are valid and worthwhile. This makes the papers in every journal a vital part of the improvement of scientific method as, read by other scientists in the field (both pre and post publication), the papers will spark debate, future work, and eventually lead to advancements in all fields of science, be that a discovery of a cure for disease or a way to limit climate change.

Crime Rates are falling but is that the whole picture?
The Burial of Pompeii and Herculaneum