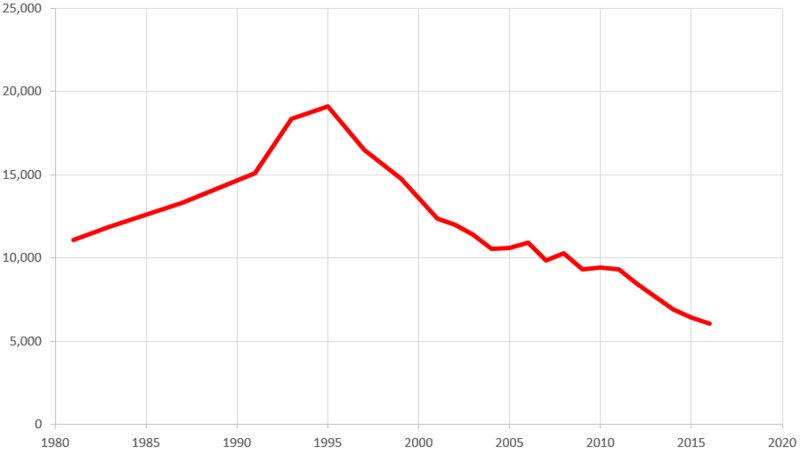 Crime Rates are falling but is that the whole picture?

The media sensationalise crime and certain types of crime, though recent reports have suggested that rates are going down. But do the media have a point here? Are these statistics telling us the whole story? In Sociology, one aspect we study is crime and crime rates, and I have some more facts of my own. Can we find the truth somewhere amongst it all?

In 2014, figures released by the Office of National Statistics (ONS) showed that the overall national crime rate had fallen by around 6.9 million incidents since the mid 90s – 64% since the highest rate that was recorded in 1995. It was part of a long-term downward trend, with the most significant fall being in the number of theft offences. Further, the chart above, which they published for 2016, shows the overall rates have continued to fall since.

However, official statistics often do not give the whole story, and in the case of the 2014 theft offence statistics alone, there was some room for debate. Although released by the ONS, the police reported figures for the same crime that gave a different story, showing an increase of 2% overall. There was an increase in certain other crimes too. The most significant of these were;

The Crime Survey, which produces the ONS results, interviews people and finds out if they have been a victim of crime. However, Police-Reported statistics are those that have been reported to the police. Official statistics do not always give the full story…

• Official police statistics on crime will only record what is officially reported. If a crime is not reported, it will not show up in the figures. For example, if someone has their bike stolen, they may think it is not worth the trouble of reporting it. Other people may not report crimes because they feel ashamed or scared to go to the police. And if someone suffers a crime against them but they have committed a crime themselves, it is also less likely they will go to the authorities – If two people are involved in a fight, for example.

• The Official statistics will also vary according to who is collecting them and what for.

So although the figures could vary according to how and why they are being collected, why do the statistics look as though crime is increasing in some cases and decreasing in others?

• One possible reason is police poorly recording crimes, which they have been criticised for in recent times. It suggests figures may not always be entirely accurate.

• The increase in reported rapes and other sexual offences could be because people are more willing to come forward to report crimes like this, whereas in the past victims have often been reluctant to report such incidents due to negative police attitudes.

• Cardiff University found that 10% less people were seeking help after suffering a violent attack in their hospital departments since 2013/2014. This may not be because of a reduction in the attacks, but due to a reduction in people seeking help. We do not know which.

• Government statistics show that the murder rate is at its lowest since 1977.

• Crime surveys where people are randomly asked if they have been a victim of a crime can give a truer picture of what is going on, as this will show us people who have been victims, but may not have reported it.

• Other factors can also affect crime statistics –
o There has been an average quality increase in living conditions for people through the Western world, which does impact on crime rates generally.
o It is also harder to steal a car or break into a house than it was a few years ago. More people have alarms and complex security systems.
o As more electronic goods are available at cheaper prices, it may not seem worth the trouble of stealing them if there is not much money to make for them.
o Crimes in the street are riskier due to the millions of CCTV cameras watching people.
o Another factor is demographics. There are less young men at the moment and young men are more likely to be involved in violence than other groups, so this has led to a reduction in the figures.

Ultimately, there is no clear-cut answer as to why the crime rates are falling and whether or not they are falling in all categories. Crime surveys where people are randomly asked if they have been a victim of a crime can give a truer picture of what is going on, as this will show us people who have been victims but may not have reported it, meaning the figures will differ to police reported figures.

Despite all of these facts, however, there is no clear-cut answer as to why the crime rates are falling and, indeed, if they are truly falling in each and every category. The one thing we can say with certainty is that may it is a topic that will be hard to find a consensus on for a very long time.

1858: The Heatwave that sanitised London
Philosophical Transactions – The Importance of the Scientific Journal