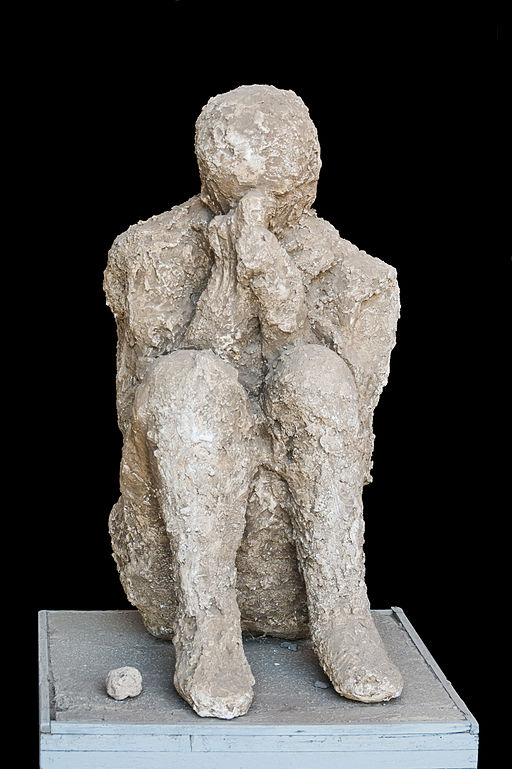 The Burial of Pompeii and Herculaneum

On the 24th and 25th August, AD79, the Mount Vesuvius volcano erupted, burying the Italian cities of Pompeii and Herculaneum under meters of stone and lava. Thousands of citizens were killed.

Less than ten years previously, in AD62 and 63, violent earthquakes had shaken the region, the Bay of Naples. These quakes had been caused by gases building up within Vesuvius, trying to force their way out. A thick layer of lava had also begun to harden, forming a plug in the crater. For several days before the eruption in AD79, there had been more earth tremors as the gases vented slowly. On 24th August, however, Vesuvius could hold back no longer, and at about one o’clock in the afternoon, it erupted. The volcano spewed out a cloud of poisonous volcanic gas, stones and ash to a height of 21 miles, with molten rock and pumice thrown out at a rate of 1.5 million tons per second. Anywhere nearby was to suffer severe consequences, and several Roman settlements were obliterated and buried underneath massive pyroclastic surges and ash-fall deposits. The most well known of these are the cities of Pompeii and Herculaneum.

Historians have been given a unique insight into the events of the eruption and its consequences as every stage of the disaster was witnessed and recorded by Pliny the Younger, a Roman administrator and poet. Pliny had been staying on the opposite side of the Bay of Naples, about 19 miles from the volcano. He wrote that, “Broad sheets of flame were lighting up many parts of Vesuvius; their light and brightness were the more vivid for the darkness of the night… it was daylight now elsewhere in the world, but there the darkness was darker and thicker than any night.”

During the night of 24th, or early on August 25th, the situation deteriorated further. Pyroclastic flows began to slide down the sides of the volcano. The flows were rapid, dense and scalding. They destroyed all the buildings in their path, incinerating or suffocating the people who hadn’t managed to get away. The earthquakes that accompanied the volcanic eruption then caused a mild tsunami (severe tidal wave) in the Bay of Naples. Then suddenly, on the evening of day two, the eruption ended. But though it had been relatively brief, the damage it left behind was catastrophic.

The eruption had occurred only two months after the Emperor Titus had ascended to the throne. Faced with the almost complete destruction of life and property around the Bay of Naples, and the complete loss of the cities of Pompeii and Herculaneum, he began the world’s first disaster relief effort and appointed two organisers, as well as donating large amounts of money from the imperial treasury to aid the victims.

Pompeii had been a much larger city than Herculaneum, with an estimated population of 12,000–15,000 people, while Herculaneum held around 4,000–5,000 people. The British Museum describes both cities as places where, “the inhabitants of both enjoyed all the amenities of the cities, from baths and theatres to temples and markets, and lived in a wide variety of homes, from luxurious houses to tenement blocks, small flats above shops and live-in workshops…. Pompeii was the larger city and more of a commercial hub, with at least 150 bars and taverns, compared with just over a dozen in the smaller seaside city of Herculaneum.”

After Mount Vesuvius erupted both communities were wiped out; completely buried in ash, stone and pumice. It wasn’t until 1748, when the cities were accidentally rediscovered, that we began to understand the sheer scale of what the area suffered in AD79. Almost as soon as it was found, archaeologists began to study and work on the sites, and that work is ongoing today. Preserved by the ash and stone, the two lost cities remain, with their forums, baths, many houses, and some out-of-town villas, like the Villa of the Mysteries at Pompeii, that remains largely intact.

The true number of people killed by the volcano will never be known, but 1044 bodies were found in Pompeii and another 332 in Herculaneum. 300 of the Herculaneum dead were found packed together in the arched vaults under the city, where they must have run in their panic to escape.

In 2003, archaeologists made casts from impressions of over a thousand of the bodies found (pictured). These plaster casts, which can be seen on a visit to Pompeii, form a stark memorial to the cities that once thrived with locals, but now draw thousands of tourists every year, whilst historians endeavour to learn more about both the cities Mount Vesuvius locked in time so long ago.