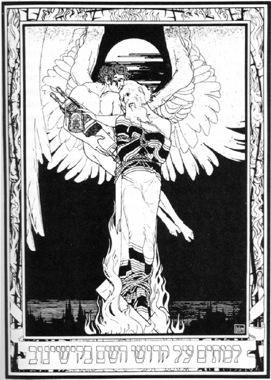 27th January is Holocaust Memorial Day, remembering the atrocities of the second world war against the jewish people. Also to be remembered are the Russian pogroms that came before it, at the beginning of the century, which would provide foundations for the later tragedy. Of these, one of the first and worst, was Kishinev (or Chisinau).

Today the city of Kishinev is one of the largest in Moldova, and with a population of 490,000, it has become, since the 1970s, one of the main commercial centres of the region. In modern times it has thrived. However, in 1905, Kishinev witnessed one of the worst racial atrocities of the early 20th century.

In 1900, some 43% of Kishinev’s population was Jewish. They had been attracted to the city by the commercial opportunities afforded by a relatively thriving agricultural hinterland of small family-run farms selling their produce in its central market. Kishinev was part of a Tsarist Empire, administered from Moscow, being a Russian garrison town and capital of Bessarabia, then part of the Russian Pale of Settlement in which Jews were allowed to settle but enjoyed few legal rights.

For years the local newspapers had specialised in publishing virulent anti-Semitic articles urging the orthodox population to “crusade” against the town’s Jewish community. And it would be one of these papers that would instigate events.

The pogrom that took place on the 19th and 20th April 1905 and was sparked by the death of two Christian children in Kishinev’s Jewish hospital. The main newspaper, The Bessarabia, insisted that the children had been murdered in order to collect their blood for the preparation of the bread of Passover. This “blood libel” allegation gained the ready support of the Russian orthodox bishop.

The pogrom began on April 19th, Easter Sunday, 1905; 92 Jews were hacked to death, 500 seriously injured, 700 homes destroyed and 600 stores pillaged by Rumanian peasants and Russian Cossacks. No attempt was made by troops or police, under Russian control, to stop the rioting. The Russian Minister of the Interior, acting with the approval of Tsar Nicholas 11, did nothing, even when the Cossacks targeted pregnant women and children.

In addition to its anti-semitic nature, this pogrom had many of the characteristics of a peasant’s revolt; Jewish money-lenders and pawnbrokers had been active in providing seasonal loans to the peasant farmers to buy seed corn.

The reporting of the pogrom caused international outrage and condemnation of the Tsarist autocratic government, particularly in France, Germany and above all America. It sparked the beginning of a mass exodus from the Russian Pale of Settlement into Western Europe, America and Palestine – but mainly America and most specifically, to New York. This migration exasperated tensions in all the host countries, particularly France and Germany, just as the influx of foreign migrants still does today. Institutional antisemitism coupled with aggressive nationalism would then flourish in central Europe after 1905.

The Kishinev pogrom, together with subsequent outrages, also sparked the rise of militant Zionism amongst the Jewish youth of Poland and Lithuania, vastly increasing the numbers seeking asylum in Palestine. It also marked the end of a millennium of Jewish passivity in the face of humiliation. Ultimately, the roots of the Holocaust and of the Jewish response, “Never again”, have their origin in the Kishinev pogrom of 1905. It is therefore as noteworthy to History as those awful events that would come later.

Cain and Abel: Religion and Global Conflict
29th January, 1813: The Publication of Pride and Prejudice