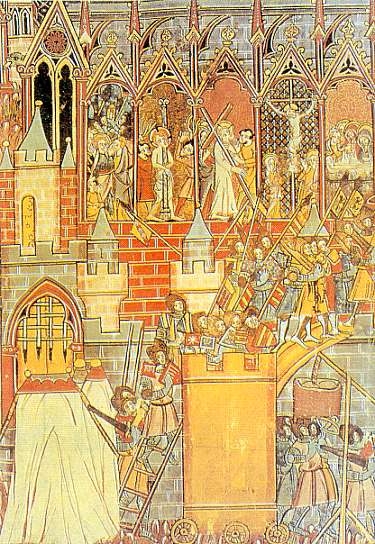 It is a common fallacy that rival religious faiths are the prime cause of global conflict. However, no matter what you see in the news, and even in the light of current events, the truth is that neither the history of warfare nor that of religion itself convincingly supports such a view.

Plainly, not all wars are religious wars; Rome against Carthage, the two World Wars, Korea and Vietnam were all about issues in no way connected with any kind of religious difference between the protagonists. You might point to the The Crusades of the Middle Ages as an example, but these were more motivated principally by a thirst for booty and the economic imperative of seizing land. Event the current middle eastern conflict between Sunni and Shia are really about the political and economic disparity between the two branches of the same faith.

The confusion at the heart of this debate is exasperated by what different societies understand by religious faith. In the West, since the Reformation a sharp distinction has been made between religion and politics; in the Middle East, India and China, such a view makes no sense as their nation’s societies view all human experience as falling within the realm of the sacred. Historically, they have made no distinction between politics and religion.

It should also be remembered that the religious texts of Judaism, Christianity and Islam all make numerous references to dialogue as a means of settling disputes wherever possible, advocating diplomacy, tolerance and humane treatment of the vanquished as well as developing theories of what constitutes a “just war.”

The story of  Cain, a farmer, and Abel, a shepherd, as told in Genesis, is often interpreted as the first murder in human society and the origin of warfare. Cain kills his brother Abel out of greed and envy, then feels shame and remorse when confronted by God.

Conflict involving professional armies became an endemic feature of human society at about the time hunter gathering was replaced by settled farming and the building of cities. Farming provided surplus wealth, which in turn led to the development of king-priest hierarchies who controlled and often enslaved the indigenous populations that produced the agricultural surplus sustaining these cities. Examples can be found in Rome, Athens and Sparta.

All power groups, throughout history, have used religion to sacrilise state violence. The mind-set of prehistoric societies viewed the world in terms of gods who were actively concerned with human affairs. Indeed, the activities of the gods mirrored exactly all the preoccupations of human societies. The gods were also omnipotent, conferring victory in battle. It made perfect sense to worship and placate the gods in victory and abandon them for other deities in defeat.

Throughout human history ruling elites have coupled religious affiliation to imperial ambition. It is an easy scapegoat and, as described, we should remember and be aware of the fact that it is not always to blame.

Flagging Motivation after Christmas? Advice to Kick on with.
Holocaust Memorial Day: The Kishinev Pogrom of 1905