Hollywood and the American Depression 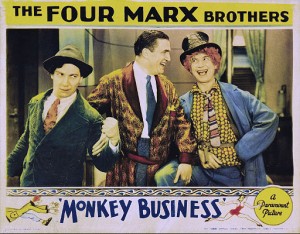 The Hollywood of the late 1920’s and early 30’2 reflects the widespread pessimism and loss of confidence that was the initial reaction of the American people to the Wall Street Crash, the worst financial crisis of modern times.

As with the rest of American industry, Hollywood was forced to adapt to economic recession: to cut costs, close theatres, reduce wages and offer cut-price deals on ticket sales to attract hard up audiences. The Marx Brothers’ film Duck Soup and Charlie Chaplin’s The Immigrant offered both comedy to lift the gloom and, at the same time, a satire of those American institutions that had caused the collapse.

However, by 1933 there began a slow recovery, accompanied by a complete change of mood and style that soon attracted mass audiences. In 1934 an average of 90 million Americans went to the movies each week, attracted by improvements in film lighting, photography and the smooth synchronisation of movements and sound recording. The film stars of the New Deal, Cary Grant and Humphrey Bogart, for example, both made their first Hollywood films in 1932. A new cultural genre was being created – one which proved itself wholly in tune with the New Deal.

In the warmth and subdued lighting of the cinema, the audience could forget the poverty and violence of the city streets; the single room boarding houses, the boredom and shame of living on handouts were all, for a time, replaced by enjoyment of the vicarious pleasures of celluloid dreamland. Young shop girls could dream of romance, young men of adventure and heroic action. The cowboy film and the Robin Hood adventures of Erroll Flynn both extolled the virtues of heroism and rugged individualism – the values of the Old West. The “get up and go” spirit was revived, helping to keep alive the American propensity to accept new challenges, new frontiers and to move to new  places in order that they might embrace new experiences. The movies encouraged Americans to be optimistic and sustained the belief in the American Dream, that happiness, wealth and good life were all just around the corner. In other words, Hollywood constantly strove to restore confidence in the policies and institutions of the New Deal – as essential as the planning of economic recovery for American society to emerge from the Depression.

But Hollywood was not just a dream factory. It helped to create solid economic opportunity. By 1935 it had given birth to myriad small satellite businesses, the very seed of economic recovery. The movie industry encouraged innovations in photography, lighting and sound equipment as well as the growth of service industries and new infrastructure. The growing prosperity of California and Los Angeles opened up new home markets for firms like the Bell Telephone Co. and Henry Ford’s Detroit-based car factories.

By 1940, a mere 11 years after the Wall Street Crash, Hollywood had created a distinctive entertainment industry of lasting global proportions.

Covering up the Lusitania
Rule Britannia: Is it really best to only read texts written in Britain?