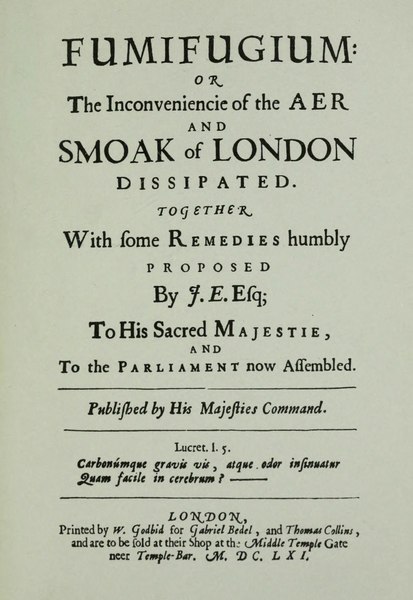 Each year, on the 28th July, World Nature Conservation Day is observed the world over. The day marks a timely reminder to humankind about the importance of environmental advocacy and protecting natural resources. Here are five historical environmentalists who have contributed significantly to environmental causes in their own unique ways:

An English writer, landowner, gardener, courtier and minor government official, Evelyn’s preoccupation with apparently contemporary environmental problems and his suggested solutions are a remarkable legacy. Evelyn authored Fumifugium (cover pictured above), one of the earliest known works on air pollution.

The book is still considered a significant contribution to the literature on the subject over three and half centuries after its publication. In it, he criticised the way that smoke and noxious waste from industries such as lime-burning and soap-boiling were polluting London’s air.

Evelyn spent time travelling to some of Europe’s great cities such as Amsterdam, Rome and Sienna, and he was impressed by their town planning and layout. The inspiration from his visits led to him being respected in his own day as a horticulturist and garden designer, at the forefront of the introduction of European styles of landscaping to England.

Thoreau was an American naturalist who articulated a philosophy based on living simply, showing environmental and social responsibility and resource efficiency that is as inspiring now as it was then. He is perhaps best known for his book Walden, a reflection upon simple living in natural surroundings, and his essay “Civil Disobedience”, an argument for disobedience to an unjust state. Thoreau was one of the first prominent Americans to advance the idea of compassion toward animals and he advocated and practiced vegetarianism.

Born in 1913 and a qualified landscape architect, Nancy was an English writer and lecturer on landscape and land use and a member of the UK Institute of Landscape.

Her most celebrated work is New Lives, New Landscapes (1970), which gives a visionary account of the challenges facing land-use planning in the United Kingdom. It addressed profound environmental concerns and marked the transition from a post-war to contemporary society. The book has influenced planners, landscape architects, and educators and in 1987 the Fairbrother Group of urban wildlife organisations was established and named in her memory, ultimately becoming the Urban Wildlife Network.

Celia was an American environmentalist and conservation advocate. Hunter trained as a pilot and eventually served as one during World War II. In 1947 she arrived in Alaska looking for an adventure. She created Camp Denali which opened in 1952, and it was probably the first eco-tourism venture in Alaska. Celia also started the Alaska Conservation Foundation (ACF) in 1980, previously known as the Alaska Conservation Society (ACS).

Betsch was an African-American opera singer who became an environmentalist and activist. Betsch was better known as The Beach Lady, because she spent the better part of her adult life educating the public on the black history and environmental importance of American Beach.

Betsch gave up her home and began living on the beach, and from 1975 onward, she dedicated herself to the preservation and protection of American Beach from development and destruction. The Dalai Lama named her an “Unsung Hero of Compassion” just after her death in 2005.