El Nino and the American Depression: A lesson from History 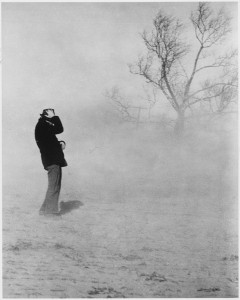 The drought which devastated the Great Plains in the 1930’s was the worst climatic event in modern American history, deepening and prolonging the economic destruction wrought by the Wall Street Crash of 1929. Its engineer was called El Nino, and given the manhandled state of our economic and environmental world today, it should be recalled. Combined with a familiar blend of human ignorance and greed, it was more than just a natural disaster.

El Nino is a broad band of warm seawater in the Pacific Ocean. When this expanse of water cools and at the same time water in the Atlantic is warmer than normal, the combined effects produce unstable sea surface temperatures which create drought conditions on the Great Plains of North America, covering the Mid-Western states with dry air and rising land temperatures. Changes in sea temperatures also cause changes in normal weather patterns, moving the position of the jet-stream southwards.

During the mid-1930’s, the jet-stream weakened. Its normal flow takes it over the Gulf of Mexico, before turning north and subsequently losing its water over land. But the air flowing over the land surface of the Great Plains in the 30’s carried less water than usual and reduced the seasonal rainfall throughout the Mid-West, triggering drought.

The impact of severe dry winds over the Mid-West was exasperated by the effects of inappropriate farming methods used by white settlers of the Plains for decades previously. Having exterminated the Buffalo upon which the native Indian tribes relied for almost all their needs, the migrant European farmers set about exploiting the land by planting a massive acreage of corn, using deep ploughing and thus stripping the land of the natural grass that binds its soil and retains moisture. Crop rotation was not adopted. The result was to degrade the top-soil and cause extensive soil erosion, turning it into fine dust once the hot, dry winds had scoured its surface.

The dust storms of the 1930’s ruined over 100 million acres in the Texas Pan Handle, New Mexico, Kansas and Colorado, causing hundreds of thousands of families to abandon their ruined homesteads (the Oakies of John Steinbeck’s Grapes of Wrath and Of Mice and Men). This soon became the biggest internal migration in American history. The families moved west, attempting to earn a living picking fruit in California for starvation wages.

The effects on the already spreading depression were to accelerate and deepen the crash; mortgage default worsened, causing banks all over small town America to close. The financial burden of poor relief increased beyond the ability of the federal states to pay from taxation, which was in any case declining as the jobless total rose. Health resources were similarly unable to cope. Migration labour increased racial unrest as more and more people competed for fewer and fewer jobs.

By the mid-30’s America was in the eye of a perfect storm; a broken economy coupled with devestating climatic conditions over which human society had no control. It was not until 1939/40 that the El Nino effect played itself out and it was not until 1954 that American society was fully recovered.

Whether the lessons of this time were actually learned, is something worth considering. And if not, will they ever be?