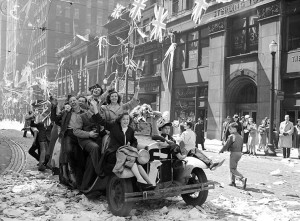 The end of hostilities in Europe was celebrated all around the world. In Britain, over one million people took to the streets for parties, and crowds gathered in Trafalgar Square to sing, dance and booze. The young Princesses Elizabeth and Margaret mingled with the cheering public. In the USA, President Truman dedicated the victory to his predecessor, Franklin D. Roosevelt, who had died of a brain hemorrhage just one month before final victory.
Ticker-tape processions were held in New York’s Time Square.

In a ruined Berlin, Hitler shot himself in his bunker beneath the shattered streets, along with his former mistress, then wife of three days previously, Eva Braun. Mussolini was captured and hanged by Italian partisans on 27th April. Both Goring and Himmler had been “disinherited” from leadership of the Third Reich and sentenced to death by Hitler for attempting to broker a peace deal with the western powers. Himmler surrendered to British troops, but then committed suicide via a cynanide capsule concealed in his mouth, whilst in custody. Goring was convicted at Nuremberg and also committed suicide, rather than face the hangman. So ended the thousand year Reich.

Even as people in the west celebrated, however, hostilities in Eastern Europe continued. Ukrainian nationalist bands fought Russian communists; Poles loyal to the Government in Exile (London) opposed communist compatriots who supported the occupying Soviet regime. Random acts of anti-semitic violence took place in Latvia, Lithuania, Poland and Romania. Survivors of the prison camps were not welcomed in their former homelands. Soviet troops rounded up thousands of German collaborators to be sent east to the Gulag, as were former Russian prisoners and those forced to work as slave labour in Germany. The British colluded by expatriating Cossacks captured in the west, having fought in the German army. Women who had slept with German troops during occupation in France, Belgium, Holland and Italy were publicly humiliated and had their heads shaved. German women did everything they could to prevent drawing attention to themselves during the first phase of Russian occupation.

Truman, who had succeeded to the American Presidency after Roosevelt’s death, was inexperienced and naive, thinking he could deal with “Uncle Joe” Stalin; Churchill’s warnings were ignored (by this time his influence in the councils of the western allies had waned).

The Potsdam Agreement of August 1945 resulted in the endorsement of a massive swathe of Eastern Europe falling under the Soviet sphere of influence. Stalin was allowed to “colonise” Latvia, Lithuania, Romania, Bulgaria and the Ukraine, as well as Poland and Hungary once he had rigged post-conflict elections in those countries.

As well as being an occasion of great joy, VE day would be, indirectly, a foundation for the Cold War.

El Nino and the American Depression: A lesson from History
The Great Depression: Going Down