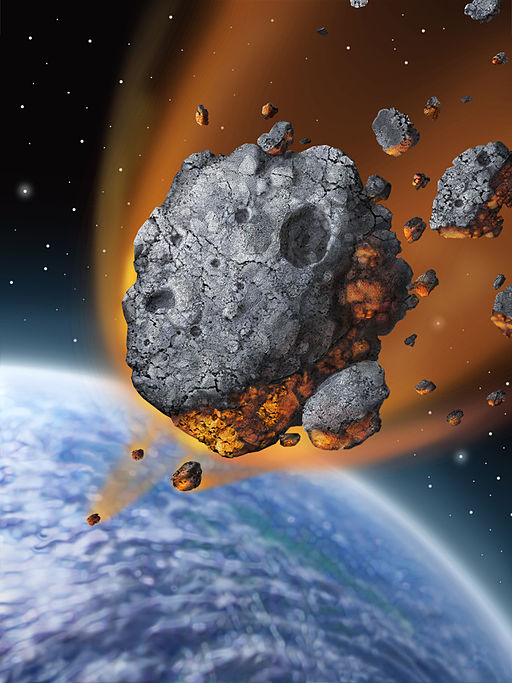 Asteroid day is a global awareness day the details of which can be found at, http://www.asteroidday.org/

Asteroids are small celestial objects that orbit the Sun, mostly between Mars and Jupiter. Sometimes they are called planetoids. They can leave the asteroid belt as the result of a collision or through the influence of Jupiter’s gravity.

What are Asteroids made of?

This depends on the distance from the Sun. The furthest from the Sun are known as C-type. C stands for carbon. Closer to the Sun, about 60% of asteroids are largely made of silicate minerals like Olivine and Pyroxene. Some contain Iron and Nickel metals. The other 40% are C-type. These silicate asteroids resemble meteorites found on Earth, known as the chondrites. The composition of asteroids indicates that they were molten at some time. Some are solid lumps, others are piles, i.e. loose pieces held together by gravity after collisions.

It is generally believed to be the case that the dinosaurs and vast numbers of other species were wiped out by a large asteroid hitting Earth on the Yucatan peninsula about 65 million years ago. This is called the Chicxulub asteroid which had an estimated diameter of 10 km and delivered an estimated energy equivalent of 100 teratons of TNT. So yes, they can be devastating. The destruction is dependent on things like location, impact on land or sea, size and speed as well as angle of impact and composition.

Asteroid Icarus safely passed by Earth at more than 21 times the distance of the Earth to the Moon on June 16 this year. Icarus had a 1 km diameter. On June 14, 2090, the asteroid will approach marginally closer, with a close approach distance of about 17 Lunar distances, 6.5 million km, which means it is categorised as a potentially hazardous asteroid (PHA). NASA detects, tracks and characterises asteroids in its Near-Earth Object Program, and details of the asteroids approaching can be viewed on their website http://neo.jpl.nasa.gov/ca/

If an asteroid with a 1km diameter such as Icarus hit Earth, it would cause a dust cloud which would block out sunlight for at least a year and lead to a deep worldwide winter, exhausting food supplies.

NASA has not detected any asteroid currently on a collision course with Earth, so the probability of a major collision is low. As far as they are aware no large object is likely to strike the Earth any time in the next several hundred years. We hope!

Some Close Encounters on their Way…

There are plenty of close encounters, and two asteroids getting close to Earth in the next couple of months are;

Of these two, the first is getting really close but is relatively small, whilst the second is big enough to do serious damage but is a bit further away. If this second one hit, the estimated temperature drop caused could be around 8⁰C for weeks followed by moderate global effects for months. There would certainly not be a summer, and if it hit somewhere like London the devastation would be hard to imagine. An asteroid of 5km in diameter would cause day to become night, stopping photosynthesis for months, leaving vegetation requiring decades to recover. Humans would probably not become extinct, but much of the global population would die through lack of food.

All this should lead to one conclusion: Yes, it’s worth investing some money to help research and look out for asteroids.