Diversity And Academic Aid In Games

Diversity And The Academic Exist In Gaming

A game such as The Witness is perhaps one of the most obvious examples of how gaming can aid in education. A single player puzzle game, it is one that fosters a love of exploration, problem-solving and curiosity in children.

It does this by boasting an open world, thus encouraging players to discover and explore different areas. To make it more ‘life like’, players are not given any instructions in what they have to do. Instead, they are given clues in the form of symbols and visuals, and they have to work out for themselves what to do. Strewn throughout this digital world are mazes and puzzles that players must complete to move on.

Witness’ aesthetically pleasing maps make it appealing to players, so that they are more inclined to explore. This, in turn, can stimulate players’ creativity and willingness to persevere. Consequently, it can develop players’ awareness and focus, as well as their evaluation skills, since they can look at what they like/dislike about the game. The games’ puzzles are also educational, as they involve patterns, sequences and spatial awareness. Perhaps even more importantly than this is the games cultivation of trying in the face of failure. As Henry Jenkins, Katie Clinton, Ravi Purushotma, Alice J. Robinson, and Margaret Weigel in a MacArthur Foundation White Paper write: “Part of what makes play valuable as a mode of problem-solving and learning is that it lowers the emotional stakes of failing.”

What Does This Mean?

It means that playing video games can help build children’s resilience, since they are unafraid to ‘lose’; or, ‘fail’. They know they can try again. Meanwhile, in exams and school settings, children might be fearful of failure due to the pressures placed upon them.

Perhaps more notable than this is the fact that online games can challenge norms, and so help to educate children on life-matters that extend beyond academia and exams. For instance, there has been an increase in female gamers – 46% according to Statista. To reflect this, video game developers have created more female protagonists, promoting greater gender equality. Iconic games such as Tomb Raider, particularly in its re-booted form, actively go against gender stereotypes, and allow boys to play female characters. This is fantastic, considering research has shown that boys are less inclined to read books with female protagonists. If games allow boys to not only go through a storyline as a female, but actually play through as a female protagonist, surely that is a great way to allow them to challenge their own views, and to develop greater empathy by seeing the world from another perspective?

Game developers have also included characters from the LGBTQ community to be inclusive and representative. One of the most notable games of this year was The Last of Us Part II, a third-person action adventure-survival horror game, set in a post-apocalyptic world. That sounds quite standard, but the protagonist, Ellie, is a lesbian. And rather than merely have her sexuality known, the game developers have developed the storyline with her relationships at the forefront. Just as with games with heterosexual characters, which feature a protagonist in love with their partner and pursuing them, players see Ellie in love, and doing just the same. Other games, such as Overwatch, a team-based shooter (this is a light game, similar to Fortnite, and should not be confused with a mature title such as Call of Duty) game, have LGBTQ characters and this diversity helps to enrich kids’ lives by exposing them to a variety of characters that they may not experience in their current repertoire of books.

One Game Does Not One Media Make

So, before pushing video games aside as detrimental to children’s learning, it is essential to look at what video games children are playing, and what benefits they offer. During the current pandemic, children and teenagers have been more isolated than ever, and online gaming offers them a great opportunity to socialise. Moreover, these games expose children and teenagers to a diversity of characters, thus expanding their perceptions of their world, as well as developing their empathy. Not every game will be suitable, clearly, but not every game is unsuitable either.

Some games are also designed with education in mind, as with The Witness, and not only develop kids’ problem-solving skills, but also develops a growth-mindset, as they learn to fail until they succeed! So, what games will you be playing?

For a discussion on Video games and narrative, click on the following link: https://www.ool.co.uk/blog/can-video-games-provide-real-narrative/

The Other Solstice
Being A Mature Student During The Pandemic 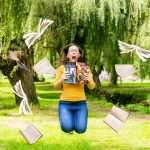 Kellie McCord is a private tutor with over eight years of experience. Having been a lecturer and educator in China, India, Finland and the UK, she has a wealth of teaching experiences, allowing her to build rapport with students from all walks of life. Respect and inclusivity is at the heart of Kellie's Tutoring, which is why she has Diplomas in the Pedagogy of Dyslexia and Mindfulness, allowing her to work with SEND learners. Kellie's mission is to empower students with the self-belief and confidence to achieve their academic goals and set them up for a life of success. To find out more, check her out on: www.kelliestutoring.com