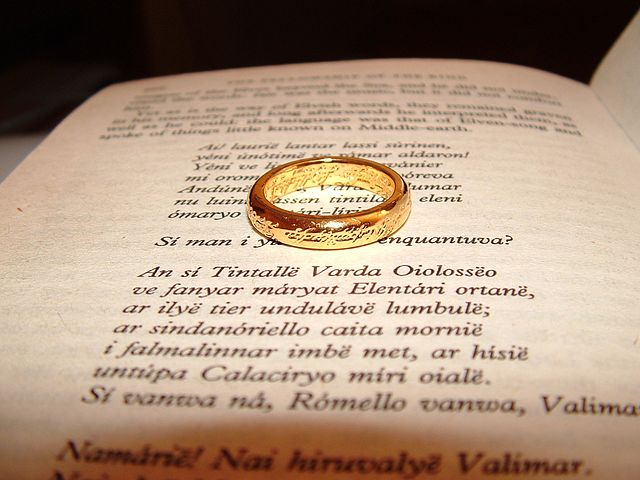 Best created in fictitious literature, and by nature over the course of a series, lore is artfully crafted to add new meaning and depth to imaginary worlds. It’s wandlore in Harry Potter, detailing how the quasi-sentient instruments of witches and wizards are handled and utilised. It’s also how Middle-earth was created by music, before the elves of Valinor waged war on the first dark lord, Morgoth.

Understandably, some are put off slightly by lore in their literature. Often, it’s vast and overwhelming, and perhaps just one notch too high on the ‘nerd’ ladder. Still, for those who love some added mythology, it makes the stories they consume that much more layered and fascinating.

Below is a quick rundown detailing some different dimensions of lore, and how they add further flavour to two primary literary series: The Lord of the Rings and Harry Potter.

You can’t have a story without language, and when writers go the extra mile here something special is made. Of course, J.R.R. Tolkien of The Lord of the Rings fame springs to mind here, creating languages such as Quenya and Sindarin for his elves (some pictured above) and the secret tongue of Khuzdul for his dwarves. It’s all very intricate and complicated, certainly, but it means his world is inhabited by beings who seem to be more real upon the page. The characters have culture.

Tolkien famously stated that “the invention of languages is the foundation” for his story, and it’s here that can one can read his texts as linguistic triumphs rather than literary marvels alone. While most people know the tales of The One Ring, most readers also know the grim details of the black speech inscribed upon it. If described as any ordinary ring, the story would hold firm, but with those engravings the thing becomes more evil and extraordinary than without. That’s the power of lore!

It’s also worth noting that if you’re indeed put off by such details, Tolkien might well sympathise with your view – at least partially. He once remarked that he never had the “desire to go and have afternoons talking Elvish to chaps. Elvish is too complicated. I’ve never finished making it.” It’s the basis of the work, but what makes it great lore is that you don’t need to know everything to appreciate its value. Linguistic lore is a flavoursome spice in a delicious dish, rather than something for you to be consumed by. Even Tolkien knows when he’s had his fill!

If you’re being honest with yourself, you’ll likely concede that the idea of a magic school isn’t that original, or even wholly interesting on its own terms. However, Hogwarts is especially enchanting due to the lore it’s imbued with. Ghosts roam the hallways with histories of their own, portraits are alive and leap between frames, and secret rooms materialise out of nowhere based on need alone.

The lore of Harry Potter’s spaces and places became so overpowering that fans sorted themselves into Hogwarts Houses online, learning all the trivia of their founders and common rooms. Fans take pictures at Kings Cross, imagining themselves taking the famous plunge through platform 9 ¾ to head off to Hogwarts. It’s those hidden details that really make The Wizarding World feel alive and set it apart from the plethora of other wizard-centric stories.

For all the controversy J.K. Rowling is ravelled up in, one cannot deny that The Wizarding World is an absolute goldmine when it comes to lore, especially when it comes to space and place. The added magical details of all the passageways, villages and shops is what truly appeals (or appealed) to many readers the world over. The story of Harry vs Voldemort isn’t that mind blowing, but the lore around it arguably supersedes the narrative.

The Lore of Creatures and Beasts

Of course, in discussing magical and fantastical worlds, newly invented creatures and beasts cannot be omitted. The fact that something as beastly as a Balrog (Lord of the Rings) can have a name and maker, or that some creatures can only be seen when you’ve witnessed death (Harry Potter), makes a tale seem so much more powerful than it would otherwise. The more evil beings are not faceless minions that pop up for a page for our heroes to dispatch. Some of these beasts are so all-powerful that even a ‘chosen one’ or ‘ringbearer’ cannot hope to overcome them. All of this makes these imagined worlds more vast than even our heroes can comprehend, and that puts you as a reader in a truly unique position of awe and interest. The peril is real, and there are parts of the world that are so steeped in darkness that naught can be done to quash it. Dumbledore never toddles off into the Forbidden Forest and banishes the evil that resides there, despite it being on the doorstep to the school he presides over – why?

The presence of more innocent magical creatures is equally riveting. These beings tell readers that there’s an entire ecosystem in these worlds that they need to learn all about. From here, fictional careers are made possible in the forms of carers, keepers, and teachers, branching out the fiction into further areas of interest and study. This level of unceasing information helps these series to explore even more points of intrigue moving forward.

The best characters are always multidimensional, with hidden pasts and closely guarded secrets to keep readers wanting more. Characters such as Dumbledore or Gandalf are good examples of this, because though readers know they’re all powerful beings, they also know there’s a lot more to them than meets the eye. Not everything is as it seems.

Both characters have received further development elsewhere, outside of the main series of novels to which they belong. Whether it’s in blog posts, prequel films, interviews or in collections of mythopoeic stories, or even just speculation alone, there’s so much information readers aren’t immediately privy to when encountering series like Harry Potter or The Lord of the Rings for the first time.

It’s inarguable that these kinds of enticing mysteries take on a life of their own, though often they play no part in the main overarching narrative. The idea that beloved characters have had entire lives and experiences without reader supervision makes fans feel like they’re missing out and need to know more. The typical Middle-earth fan might merely think of Gandalf as ‘a wise old wizard’, but fans who consume the lore know that he is much more than that. It’s these kinds of appetising details that mean smaller books like The Hobbit can, eventually, stretch into a breath-taking legendarium of timeless tales.

There’s much more to be said about lore, but as a quick appreciation piece, The Lord of the Rings and Harry Potter are perfect examples of exquisitely written world building. While good vs evil is all well and good for narrative material, it’s everything around it that truly distinguishes one piece of fiction from another. If you revisit these tales in future, try to appreciate how the writers flesh out these tales with all the details of languages, spaces, creatures, and characters – that is if you haven’t already!

Why We Need To Keep Museums Going
Fantastic Dyspraxics: Succeeding In Distancing Learning With Dyspraxia