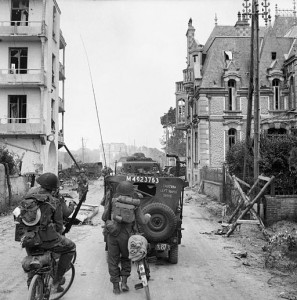 By 12th June 1944, Allied troops had consolidated a front line well south of the Normandy beaches, stretching west and north well beyond Grandcamp Les Bains  and east almost surrounding Caen. Within 6 days, Hitler had lost the initiative in France.

However, as French men and women went wild with joy in Paris, others, particularly those in Normandy, watched the devastation of their lands with despair and bitter resentment. Over 20,000 French citizens were killed, with 15,000 Frenchmen losing their lives during the initial aerial bombardment by Allied planes. A further 20,000 were seriously wounded. A casualty list of over 35,000 civilians between June and September 1944 was officially recorded. Young children lost their parents and lay traumatised in the smoking rubble of Normandy towns and villages, and vast acres of fertile farmland and apple orchards, together with cattle, were destroyed. It is no wonder that many cursed the “liberating” armies.

The German armies lost 240,000 troops to surrender, at a rate bearing comparison with German losses on the Eastern front. British, Canadian and British losses were over 83,000, with over 124,000 American soldiers killed in action. The combined Allied air forces lost over 16,000 air crew. The words of Wellington after Waterloo, that “next to a battle lost, the greatest misery is a battle gained,” show their meaning through these figures.

Harmonious relations amongst the senior commanders of the Expeditionary Force did not survive Montgomery’s “war of attrition”, fought in the sunken lanes of the Normandy countryside. The problem was his arrogance. Even before the war ended he tried to claim all credit for the combined Allied victories on D-Day, refusing to admit to any mistakes and belittling the American contribution. Eisenhower considered him a psychopath and extreme egotist. He was supported in his opinion by the senior staff of the Canadian air forces. Montgomery’s behaviour was a diplomatic disaster, souring relations between Britain and America, and between Churchill and Roosevelt, during the final stages of the war in Europe and in the immediate post-war years.

The Normandy campaign began the liberation of the continent from Nazi dictatorship and the start of the process from tyranny to lawful constitutional government in all the former occupied territories. It denied the Nazi’s the use of the V2 rocket sites which bombed London. Above all, it forced Hitler to withdraw troops from the eastern front, and the Balkans relieving the pressure on Stalin which in turn facilitated Russian advance into Germany and Eastern Europe and thus contributed to the onset of the Cold War after 1945. An ironic end to such a great victory.