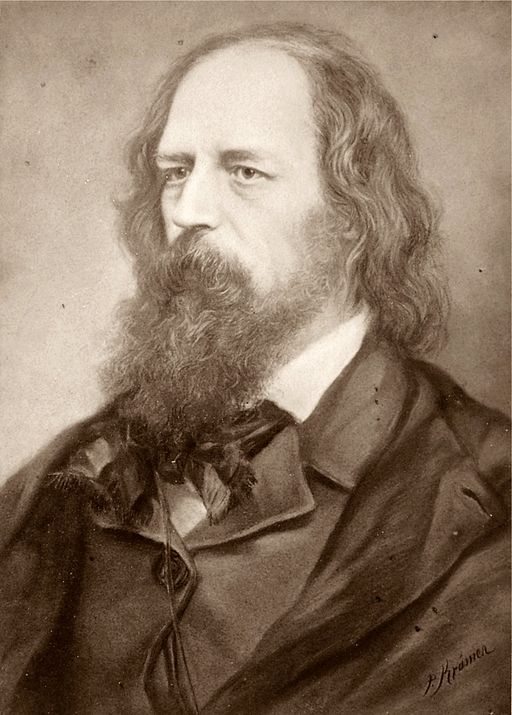 Alfred, Lord Tennyson, one of the UK’s most celebrated poets. Born in 1809, in the village of Somersby, Lincolnshire, Alfred was the third of his family’s eleven children.

It was Alfred’s father, George, who taught him Latin and Greek; languages which provided the mythological influence that can be seen years later in poems such as Ulysses.
Alfred was a pupil of Louth Grammar School in Lincolnshire between 1816 and 1820, before being educated at home by his father. Then, in 1827, at only seventeen, Alfred enrolled at Trinity College, Cambridge. In the same year, he had his first volume of poetry, (which he wrote with his brother Charles), Poems by Two Brothers, published. Although Tennyson ultimately left Cambridge without his degree (his father died in 1831, and there was no money left to pay Alfred’s fees), he went on to publish two further volumes entitled Poems, Chiefly Lyrical in 1830 and Poems in 1832.

It was at Cambridge that Tennyson met his greatest friend, Arthur Henry Hallam. When the twenty-two year old Hallam died suddenly of a brain haemorrhage in 1833, Alfred began the poem In Memoriam A.H.H. This poem was not just a tribute to his friend, but a social commentary on the world to which Tennyson belonged. In his lifetime, long-held religious and moral values, previously considered unquestionable, were being undermined by new scientific discoveries. His poetry began to reflect these issues and question previous certainties. However, his views bought him criticism, and for a while Alfred became reluctant to publish any new volumes. It wasn’t until 1842, when Poems, which included new material as well as improved revisions of earlier poems such as The Lady of Shallot, received rave reviews, that Tennyson’s popularity grew again. In 1850, after reworking it for 17 years, In Memoriam A.H.H was published. It contains many well known lines, such as “Tis better to have loved and lost, Than never to have loved at all.” In this same year he became Poet Laureate.

Soon Alfred was producing the work he is most remembered for today, such as Enoch Arden and The Charge of the Light Brigade. In 1883 he was awarded a barony, taking a seat in the House of Lords in 1884. Then, at the request of Thomas Edison in 1889, Tennyson agreed to record some of his poems, including The Charge of the Light Brigade. These early copies, made onto wax cylinders, are still usable today. You can listen to him reading them by following this link:

In 1889 Tennyson’s health became frail due to a severe rheumatic illness, and on 6th October 1892 he died. Buried in Westminster Abbey, Alfred, Lord Tennyson left behind an incredible body of work which spanned a career of 62 years.

First Result of the Day
A Prize Worth Winning