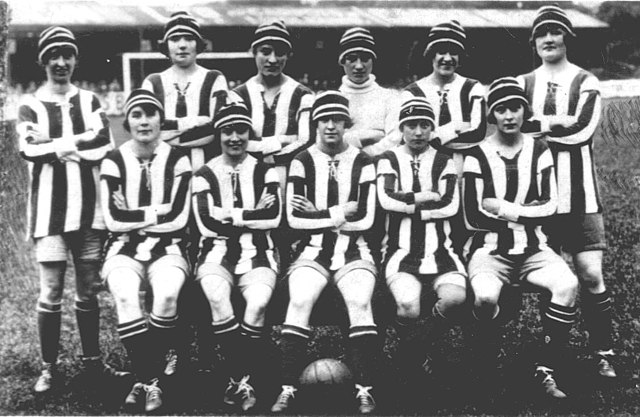 Women’s football in Britain, particularly in England and Northern Ireland, has seen another surge in interest this month, as the European Championships took place in England. It will continue an upward trend in popularity, one that has been getting ever steeper in recent years. This popularity, though, has been hard earned; the women’s game here was originally held back decades, because it got too big, too soon for some.

The First World War saw the Football League suspended in 1915. However, one football team did rise to prominence during the conflict. And it was made up entirely of women.

Founded in late 1917, this was a side (pictured) made up of workers from the Dick, Kerr and Co. Factory in Preston, Lancashire. It would be too simplistic to say that they were filling in for the men when they first kicked off, but it was a factor. Their first game, against Arundel Coulthard Factory, drew 10,000 people. Even when the men’s league resumed, their popularity continued to grow. In fact, it was continuing to grow well after the war ended. In 1920, the Dick, Kerr Ladies famously drew a crowd of 53,000 at Everton’s Goodison Park, with further thousands locked out, for a fixture against St Helens. Women’s football, it appeared, had a real foothold in the national game.

Unfortunately, such was this success that those in charge of the men’s game came to the conclusion that their own Football Association was under threat. If so many people were to attend women’s football matches, perhaps they would not attend their own league’s games anymore, they reasoned. The writing was suddenly on the wall, and all too quickly women’s football would be set back years. On 5th December, 1921, the Football Association banned women from playing their game, deeming it “unsuitable”. The ban remained in place until 1971.

The Long Road Back

When they were finally allowed back on the field, the women’s game found itself in a place far removed from the days of 53,000 crowds. It remained unprofessional, and would do so for further decades. More importantly, there was by now little interest, and facilities were basic at best. Again, that would remain the case until comparatively recently – and even now it cannot be said that women and men are on an entirely even playing field. The current Northern Ireland squad is largely part-time, for example, and last season second tier side Coventry United were almost disbanded overnight without any notice afforded to the staff or players.

The first Women’s European Championship was not arranged until 1984 (England lost in the final’s second leg to Sweden – on penalties, of course – in front of a sparse crowd and on a dubious pitch at Luton Town). If UEFA’s new involvement was progress, the bizarre facts that each half only lasted 35 minutes and a smaller ball had to be used showed there was some way to go.

It was only during the mid to late 1990s that things began to truly recover, and in 2005 England hosted a full European tournament for the first time. The top flight improved and established itself. When further improvement was sought, some drastic reorganisation was implemented, and the Women’s Super League (WSL) came into being in 2010. A few years after that, the new league became fully professional.

The tipping point towards the mainstream for women’s football was arguably when Great Britain faced Brazil at the London Olympics in 2012, when the attendance was 70,584, smashing all records set in years previously. A decade on, there was a capacity crowd for England v Austria at Old Trafford in the opening game of Euro 2022, and when England made the final at Wembley they played to a full stadium of over 87,000. Even had England not reached that final, the figure would have been the same.

In recent years, England had reached two World Cup semi finals, the previous Euro semi final, and were runners up at Euro 2009. Scotland qualified for the World Cup in 2019, and Northern Ireland also made their first major tournament appearance this summer. Crowds were large for Euro 2022, and not just for the home nation’s games, with Sheffield United’s Bramall Lane particularly successful in selling tickets locally. The quality of play, as we have seen, is far above what it was at Euro 2005, though at club level there remains  work to be done to improve the game and its profile further, particularly outside the WSL. One could also argue even greater prominence should have been given to our Euros this summer – a number of games were played at non-league grounds. The fact this was partly due to a reluctance of clubs to be host grounds also points to attitudes needing to be changed. Perhaps an England victory will see greater willingness in the future, should England ever host a World Cup, for example. Overall, though, Women’s football in Britain and indeed across the world, is in a fast developing, healthy place, and seems destined only to grow in popularity.

The BBC covered every game of Euro 2022, with record attendances in the stands and at home. And when England did finally bring the trophy home, 17.4 million tuned in to watch (another record). You can read more here.

A Brief History Of The NHS
Healthy Writing Habits 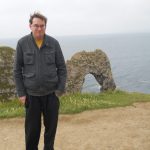