I was stopped the other day by my neighbours.  Their grandson Tom had just been for an interview at London University; “but he’s worried because he thinks his A level marks will depend on who marks his paper,” they explained.  “You’re an examiner, you reassure him,” they urged confidently.

The problem is worse in arts and humanities subjects.  In scientific subjects, there is often a right answer which can be objectively verified, so it follows that marking can be consistent; but in a subject like English (which I mark) we are assessing the quality of the response, and that is a relative concept and depends upon subjective judgements.

It occurred to me that examination boards share Tom’s doubts.   They are acutely aware of the potential for inconsistent marking not only between different examiners, but by the same examiner at different times.  The mark awarded at the start of the day, when all the faculties are fresh, may be different from that given at the end of the day, when they are jaded.  What’s more, individual examiners can become more lenient or more severe as the marking period progresses. 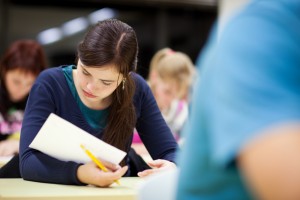 The standardisation process  which all exam teams undergo is specifically designed to mitigate and minimise the effects of these inconsistencies.  Thus I was able (I think) to reassure Tom.  I will describe the process in detail in a later blog entry.  Broadly, it’s a process which starts when the Chief Examiner for a particular qualification writes the paper and sets the marking scheme to go with it.  He then marks some sample papers with a team of Senior Examines (all experienced and with proven track records).  When consensus is achieved the scheme is passed on to the rest of the examiners who are schooled in how to use and apply it.  After this, a series of checks and balances ensures that a consistent standard is achieved and maintained.

The system is not infallible and the appeals system is there for that reason.  But on the whole, Tom can be confident that the mark he achieves will be a fair mark.

Even more certain is that A star.  Most difficult marking decisions are those which seek to separate grades in the middle (for example, a low C from a high D) whereas the really good answers (and sadly the really poor ones too) stand out, hitting the examiner right between the eyes like brilliant sunshine (or dire darkness).

David is a distance learning tutor, teaching English for  Oxford Open Learning and an examiner for AQA.

From the Mouths of Babes: My Most Hilarious Classroom Moments
The chemistry of ‘being in the limelight’.