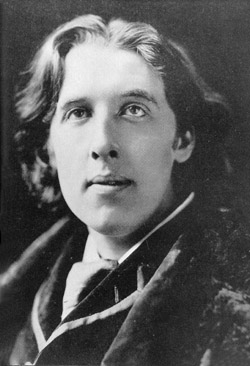 The Tragedy of Oscar Wilde

Wilde, like many creative artists, poets and writers of the day, was a great believer in the “Arts for Arts Sake” movement which had begun in France, and had been heavily influenced by the life of Edgar Allan Poe. An outstanding student, Wilde won the Newdigate Prize for Poetry, and came away with a first class honours degree. However, he was unable to win a scholarship and so made his living by lecturing and writing for periodicals. It was after his marriage to Constance Lloyd in 1884 (with whom he had two sons) that Wilde attempted to establish himself as a writer.

First he penned three short works of fiction, The Happy Prince (1888), Lord Arthur Savile’s Crime (1891) and A House of Pomegranates (1891). None of these achieved much success at first, but they, like Wilde’s only full length novel, The Picture of Dorian Gray (1891), won him gradual respect and a slowly growing readership that would continue to blossom. This gave him the confidence to write what were to become his most successful and popular works, the plays Lady Windermere’s Fan, A Woman of No Importance, An Ideal Husband and The Importance of Being Earnest. These plays, all society comedies, were rapturously received on the West End stage between 1892 and 1895.

Sadly, Wilde’s lifestyle was to bring a sudden end to his sudden success. Five years after his marriage in 1891, he met and fell in love with Lord Alfred Douglas. This would not be without consequence. Another four years later, Douglas’ father, the Marquess of Queensberry, accused Wilde of being homosexual. In response, he filed a libel action against him. It was a disastrous decision. Wilde not only lost his case, he fell prey to another against himself. As details of his private life were revealed, he ended up being arrested for gross indecency and was sentenced to two years of hard labour. While in prison, Wilde wrote a long letter to Douglas, which was published after his death, called ‘De Profundis.’

Constance took their children to Switzerland, and although Wilde tried to see them again, this was never to be. After Wilde’s release from gaol in 1897, he spent the rest of his life a bitter and lonely man, moving around Europe under various aliases, including Sebastian Melmoth and Holland. He published The Ballad of Reading Gaol in 1898, and died in Paris on 30 November 1900 in ignominy. As an article in The Guardian by Colm Tóibín explains, “People wanted, it seemed, Wilde to do charitable work in the East End of London and settle down as the sort of literary bachelor with which London abounded. But the damage done to Wilde in prison was too great and the very personality that had produced the great work and got itself into such trouble was too mercurial and restless for repentance, not to speak of decency. On his release from prison, he was ready to please no one. But his insistence on living thereafter on his own terms did not make anything easier for him.”