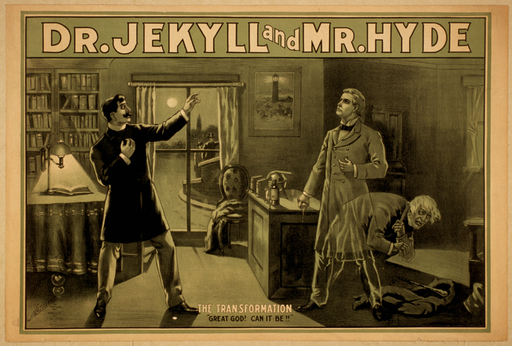 The subtle horror of Dr. Jekyll and Mr. Hyde

The cold and rainy nights of winter mark the traditional season of the ghost and horror story. TV drama has already begun to fill our nightly screens with murder mysteries and the supernatural – witness the (controversially early) Sunday evening adaptation of Robert Louis Stevenson’s The strange case of Dr. Jekyll & Mr. Hyde, first published in 1886.

It is the tale of a London lawyer, Gabriel Utterson, who investigates the disturbing behaviour of his old friend, Dr. Henry Jekyll, and the evil Mr. Hyde. It is also the first work in English fiction which describes the rare mental condition called “split-personality” or “dissociate identity disorder”. In Stevenson’s novel there are two personalities – Jekyll a conventional, law-abiding young man, his alter-ego the debauched Hyde. The novel was an immediate success in both Victorian England and in America, and has since been made into a number of films and other TV productions, albeit sometimes with dubious results.

Like many of his contemporaries, Stevenson was interested in the new inventions of the industrial revolution, and was familiar with the science fiction of such other authors as Mary Shelley (Frankenstein). He also shared the popular interest in such things as fairies, ghostly apparitions and spiritualism.

Stevenson was also a consumptive, and wrote the novel whilst enduring nightly hallucinations, exasperated by injections of drugs. Also whilst writing the book, he became interested in Louis Vivet, a mental patient suffering from split-personality disorder. Needless to say, very few of the film and TV adaptions of the novel explore the subtleties of the original work. Since its publication, literary commentators have interpreted the story as variously a religious allegory inspired by Milton’s epic poem, Paradise Lost, a Gothic fable, a Scottish devil story, or simply a Gothic horror spoof.

The story can also be interpreted as a moral allegory exposing the duality of Victorian society. There is a dichotomy in the story, between the Christian respectability of its self-righteous Church on one hand, and the degradation, injustice and debauchery of London and Edinburgh on the other. In the telling, the tale shines a light over much of the sexual mores and hypocrisy of its time.

Perhaps the fact that these varied interpretations are valid has contributed to the book’s continual publication and adaption over time. It is also a tribute to Stevenson’s original story that the term “Jekyll and Hyde” has entered the English language to describe a contradictory and universal facet of human personality.