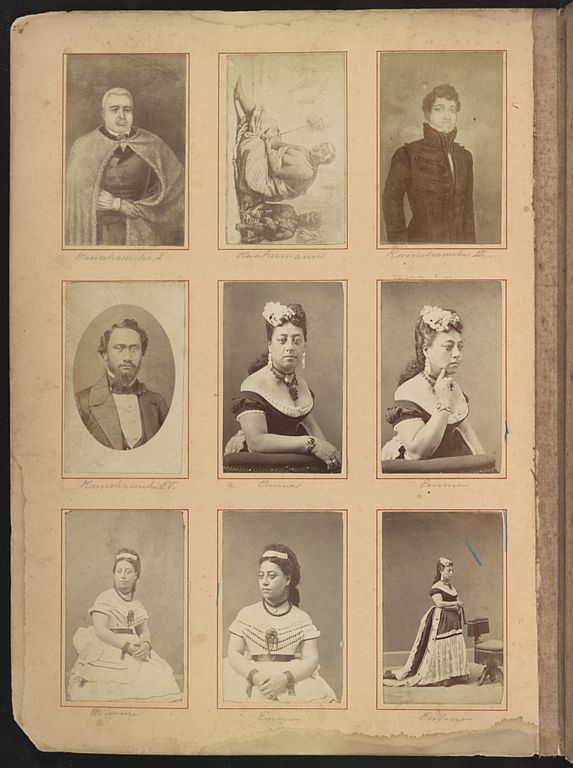 The Royal Family… Of Hawaii

It’s not just the UK who have a monarchy to celebrate. Some are more famous than others though, and they are not always where you might expect to find them. For instance, did you know that from 1810 to 1893, the Islands of Hawaii were ruled by a monarchy? It is the only state of the U.S.A. to have ever been ruled by kings and queens. But who were these people?

By the late 18th century, the warrior Kamehameha had already conquered five of the eight main Hawaiian Islands, and in 1795 he conquered the island of Oahu. The islands of Niihau and Kauai were never conquered by Kamehameha but in 1810 their ruler, King Kaumuali’i placed his islands under the control of Kamehameha, establishing the Kingdom of Hawaii.

After Kamehameha died in May 1919, his son, Liholiho, ascended the throne. He was responsible for much social and religious change in the islands including abolishing the kapu system of laws and regulations (one of which forbade men and women from eating together), and he allowed American missionaries to live in Hawaii to promote Christianity. In 1824, Kamehameha II and his wife took a trip to London, visiting Rio de Janeiro on the way. A reception at Westminster Abbey was held in their honour. Tragically, neither Kamehameha nor his wife were to return home, with both catching measles and passing away in the British capital.

Kamehameha II had named his brother, Prince Kauikeaouli, his successor and after he died in London, Kauikeaouli ascended the throne as King Kamehameha III. He his credited with creating the Constitutional Laws of the Hawaiian Kingdom in the 1830s and establishing the Chiefs’ Children’s School at which the highest-ranking chiefs’ children would be educated and groomed to rule the kingdom. Kamehameha III died in December 1854.

Whilst Kamehameha III had two of his own children, it was his nephew, Prince Alexander Liholiho, whom he named heir. His greatest achievement during his reign was the establishment of a large hospital in Honolulu, which he named after his wife, Queen Emma. The hospital still exists today. Kamehameha IV died in November 1863.

Kamehameha IV had only one child who had died at the age of four, and so he named his brother, Prince Lota, successor. On his death bed, Kamehameha IV asked several princesses to ascend the throne as queen, but they declined, and he died without an heir.

Without an heir to the throne, the constitution allowed for the election of one of the graduates of the Chiefs Children’s School to become sovereign. The election was won by Prince William Lunalilo, grandson of King Kamehameha the Great’s brother. He died a year after he was elected but, like his predecessor, he had not named an heir.

David Kalakaua was elected to the throne in February 1874. In 1881 he toured the world, visiting numerous heads of state and he’s known for building the Iolani Palace in Honolulu. In 1887, Kalakaua was forced to sign the Bayonet Constitution, restricting his powers and eventually leading to the demise of the monarchy. Kalakaua died in January 1891 whilst on a trip to San Francisco.

Having had no children, King Kalakaua named his sister, Princess Lili’u, his successor. She ascended the throne upon the death of her brother and created a new constitution to replace the one King Kalakaua had forcibly signed. Her reign ended when she was deposed by the new government on 17th January 1893.

Whilst sovereign rule over Hawaii ended with Queen Lili’uokalani, descendants of these 19th century monarchs continue to hold royal titles to this day. For more information about the Hawaiian royal family, visit www.crownofhawaii.com.