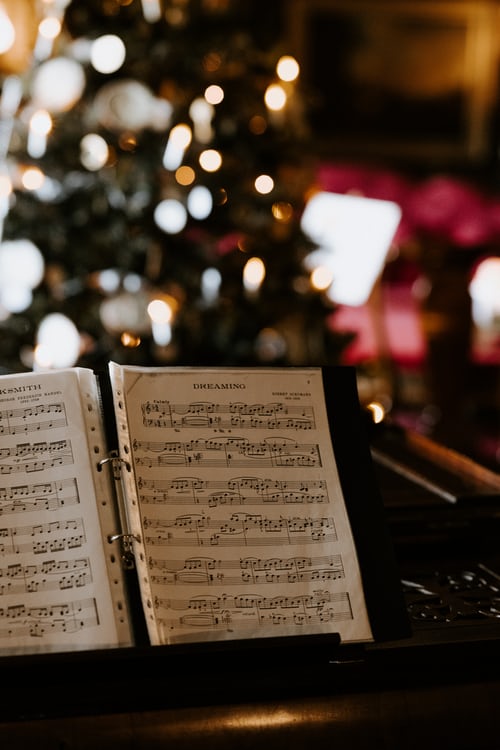 The Origins Of The Christmas Carol

Carol singing and music are traditions so tied up with what it means to celebrate Christmas that it is almost impossible to separate the two. December always sees even radio stations that pride themselves on championing the Next Big Thing in music turning over the airways to pop songs that topped the charts in the 1970s. But it is really the music and the carols we associate with childhood memories of dressing up in a tinsel halo, or clutching a stuffed sheep as we crowded around a doll in a manger, which truly epitomise the season. Today we cannot imagine a time when these songs did not exist. However, the history of the christmas carol and music tradition encompasses many more twists and turns than you might expect.

The tradition of songs associated with particular seasons has its roots in Pagan seasonal songs. Whilst there were once songs to celebrate each one, it was the Winter Solstice – usually celebrated on the 22nd of December – that was adopted by the early Christians and led to the tradition living on.

These early Christian songs were used to recall the birth of Jesus and, in turn, the connection to more religious connotations was established. There are records that in the year 129 a song called ‘Angel’s Hymn’ was sung in Rome at a Christmas service, whilst in 760 Comas of Jerusalem wrote a Christmas hymn for the Greek Orthadox Church. However, hymns at this time were all written and sung in Latin and therefore did not have such great popularity. And, with interest in Christmas waning as the Middle Ages approached (c.1200s), it looked unlikely that the tradition would continue.

The Nativity And The Carol

Nevertheless, in 1223, St Francis of Assisi began the tradition of Nativity plays in Italy, with ‘canticles’ sung to tell the story. Whilst some aspects of the songs remained in Latin, these were primarily sung in the modern language used by people attending the plays, with parts they could join in with, and, therefore, became infinitely more popular. The joy associated with singing at Christmas was rekindled and the tradition of Nativity plays and their accompanying songs spread through Europe.

During the 1500s in England, it was recorded that the ‘Boar’s Head Carol’ would be sung as Christmas lunch was carried in at Queen’s College, Cambridge. And the ‘Coventry Carol’ (a hymn still hugely popular at Christmastime today) was sung as a part of ‘The Pageant of Shearman and Tailors’, telling audiences of The Story of Christmas and narrating the Massacre of the Innocents in the form of a lullaby. With ‘God Rest Ye Merry Gentlemen’ and ‘While Shepherds Watched Their Flocks by Night’ also having been written during this period, we can see how the lyrics that fill our current hymn books were established and popularised during this time.

From this point and through the Elizabethan era these songs became greatly fictionalised tales based on characters from the Christmas story. They were entertaining rather than religious in their nature and primarily sung at homes rather not churches. Whilst the Christmas story provided the content, the joy centred around the coming together to sing rather than celebrating any religious sentiment. The songs would also be adopted by travelling minstrels who adapted their lyrics to suit the area they were travelling through, making them even more closely linked to the cultures and traditions of the festive season and the pleasure of singing as a form of entertainment as opposed to conveying any religious message. ‘I Saw Three Ships’ is an example of a song from this time that does exactly that!

During the mid 1600s, whilst the Puritans were in power, the celebration of Christmas was deemed unnecessary and the singing of carols became forbidden. But, as you might imagine, the tradition continued in secret.

It would not be until the Victorian era, when Christmas was popularised once more, that collections of carols were produced again. William Sandys and David Gilbert collated Christmas music from across England including folk songs or music traditionally sung in places considered ‘improper’, such as pubs, to form a collection of seasonal carols, ‘Christmas Carols Ancient and Modern’, which was first published in 1833. So, whilst we still sing many of these songs – such as ‘The First Noel’ – today and they often form part of carol services with predominantly religious sentiments, we can trace their origins back to many more popularised festive activities.

Before the return of carol singing to churches, the Victorian period also saw ‘waits’ (named after ‘waitnight’, a name used for Christmas Eve) singing in the streets. These groups, led by local leaders who could collect money (an act which would otherwise be considered begging!), acted as secular choirs and these, along with accompanying orchestras, became popular and would go on to sing in concert halls and, in turn, churches. From here, new carols were then created. ‘Silent Night’ was written in 1818, ‘Hark the Herald’ 1840 and ‘Good King Wenceslas’ as late as 1853.

The tradition of carols is one that remains today, in churches with the ever popular ‘Festival of Nine Lessons and Carols’, in streets whilst we shop, or at home when we listen to the radio whilst cooking our festive feast. It is a singing of seasonal songs that are rooted in an ancient past, and which remain as much a way to bring people together in joyous celebration amid the dark winter as they ever have.

Christmas Books For Kids And Adults Alike
Where Would We Be Without Bees?