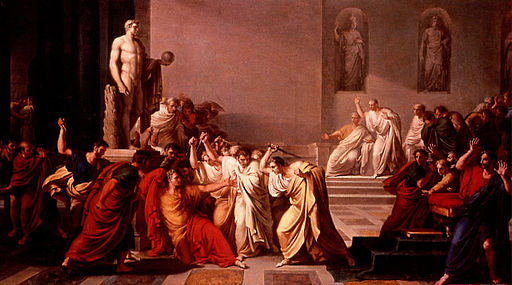 The Ides of March

The Ides of March is a date on the Roman calendar that coincides with the modern day 15th March. Although the date was originally associated with several Roman religious celebrations, it has become best known as the date on which the Roman Emperor Julius Caesar was assassinated, in 44 BC.

Caesar was stabbed to death at a meeting of the Roman senate. Led by Brutus and Cassius, as many as 60 conspirators were involved in plotting the emperor’s downfall. According to the historian Plutarch, Caesar had been warned that harm would come to him near the date of the Ides of March by a soothsayer called Spurinna. A disbelieving Caesar, it is claimed, while walking to the Theatre of Pompey, where he was to be murdered, saw Spurinna in the crowd and sneered at his mad fortune-telling, saying, ‘The Ides of March are come’, implying that the prophecy had not been fulfilled, to which the seer apparently replied, ‘Aye, Caesar; but not gone.’ Within hours Caesar was dead.

It was this famous confrontation between the seer and emperor that is believed to have inspired William Shakespeare to have written his play, The Tragedy of Julius Caesar, in c.1599.

In Shakespeare’s tragedy, it is in the first scene of Act 3 that the mocking of the soothsayer occurs, prior to Caesar being betrayed on the Ides of March by his once trusted ally, Brutus. Shakespeare tells his audience that Brutus was the last of many men to stab the emperor, leaving a dying Caesar to mutter the iconic words, ‘Et tu Brute?’ (You too, Brutus?).

Shakespeare’s post-murder scene, when the conspirators stay where they are rather than fleeing to show that they acted to save Rome, produced one of the most well known quotes from all of Shakespeare’s plays. Mark Antony stands over Caesar’s body, and starts a speech with the words, ‘Friends, Romans, countrymen, lend me your ears….’ He then expertly turns the people against the murderers, and stirs the mob into driving the conspirators from Rome.