Focus on Ukraine: Putin and his Distant neighbours 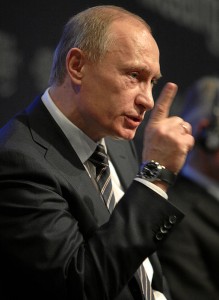 Vladimir Putin built his career in the KGB, working with the East German Stasi. Since 1991 he has held most of the high offices of the Russian state, including a long spell serving under Boris Yeltsin. During his rise to power he experienced the deep humiliation of the collaps of the communist system which accompanied Yeltsin’s period in office. This experience fuelled his nationalism and determination that Russia would recover her former international prestige and that there would be no further weakening of her defences.

It was during Putin’s first term in office (1999 – 2008) that Russia enjoyed economic growth, with a rise in GDP of 79%, the beginning of land reform and the re-organistion of the Russian military and police forces. It was under Putin that Siberian oil and gas resources were harnessed, making Russia an energy super-power. Foreign investment rose and a flourishing trade in high-tech goods with the EU transformed the Russian economy. This was accomplished by the rise of powerful industrial oligarchs, functioning like Mafia bosses and allied to Putin in the Kremlin.

Putin’s heavy-handed style of leadership also applied to Russian foreign policy. At first, Russia’s relations with America and NATO were good. Russia supported America’s “war on terror”. After 9/11 Russia faced a similar threat from Islamic terrorists in Chechnya. However, Russia did not support the Iraq war. Further alarm bells sounded in Moscow when America withdrew from the Anti-Ballistic Missile Treaty and threatened to build missile bases in Poland and the Czech Republic. Russia accused America of double dealing, cynicism and hypocrisy, regarding this “extension of the American frontier” as imperialist aggression.

Under Obama, Afghanistan and American involvement in the Middle East have proved a failure. Putin senses a weariness amongst the American people with policies involving the country in the problems of other nations. Put another way, he notes the resurgence of isolationist sentiments.

The EU presents a somewhat different picture. Britain (the City of London), for example, presents attractive opportunities for the Russian oil oligarchies to invest. Trade with the EU (Germany in particular) is growing. The EU is becoming more and more dependant on Russian oil and gas – exported through pipelines in the Ukraine. Angela Merkle is someone Putin can “do business” with. Europe’s economic interests preclude effective action on Ukraine’s behalf, and even less so on behalf of the recently annexed Crimea. America has no real stomach for serious confrontation. From Putin’s vantage point, now is the time for controlled, managed action, before Obama leaves the stage and the American Republicans make their bid for power.