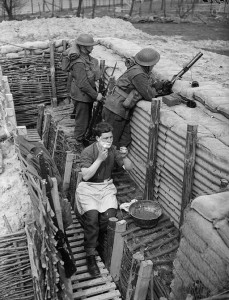 Why, and how, did the soldiers of the Great War fight and endure the privations of trench life?

Combatants of all nations endured the death of friends, mutilation, blindness, terrible noise, extreme fear after artillery bombardment, mud, rain and cold. Together with these things came lice, rats, illness and depression. All for poor pay, too. The British Tommy received one shilling per day in 1917; the French soldier even less at 25 centimes. But military discipline did not break down. There were few desertions on any large scale until November 1917, when the German army faced major problems of mass surrender and troops abandoning trains leaving battle zones. There was no mutiny in the British army.

Some of this stoicism can be explained by the peace-time habit of blind obedience and deference to authority, which was a marked feature of both English and German society prior to 1914. Letters and diaries written on the battlefield record seriously wounded men asking permission to fall-out from parade. Enlisted men were used to showing deference to their social superiors, and military discipline was certainly harsh. Public execution was a routine punishment for desertion, designed to instil fear into the spectators (see Rudyard Kipling’s poem, “Danny Deever”).

However, fear of draconian punishment does not alone explain why men endured hardship and fought. During the first phase of the war a surge of genuine patriotism was common, instilled by schooling, community norms, religion and family values in England and Germany. This soon gave rise to an intense bonding between fighting men, coupled with a profound alienation from civilian life (another literary example of this can be read in T.E. Lawrence’s “The Seven Pillars of Wisdom”). Genuine hatred for the enemy was also a factor, given the death and mutilation of friends at the front.

There were also solid physical factors which kept men fighting: food, medical attention, supplies of warm clothing, alcohol and the presence of women at the front; venereal disease and alcoholism were major health problems in all the theatres of war. Regular periods of leave were particularly important for the French poilu at harvest time. Even the high attrition rate contributed to the collective ability to endure as soldiers were continually replaced by fresh recruits. At the same time, trench life became normalised as the war dragged on.

Over the course of the conflict there was a change in the make-up of the British army. This helped to strengthen the intense bond between the soldier and the junior officers. Both Wilfred Owen and Siegfried Sassoon volunteered to return to Flanders because they wanted to be with and look after their men.

Quite a number of survivors have testified that the Great War was the greatest adventure of their otherwise dull, nondescript peace-time lives. For those that survived, the bells of hell really did go ding-a-ling / for me but not for you.