Focus on Ukraine: Putin and his Near Neighbours 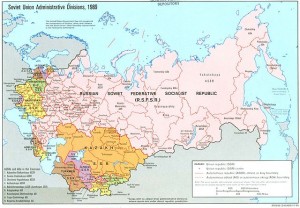 The end of the Cold War saw Russia’s prestige plummet. It opened a yawning gap in her western defences, where routes into the heartland pass through Poland, Lithuania and Romania. Latvia is only a few kilometres away from St. Petersburg, and Russia still harbours memories the Second World War.

Further south, Russia’s relations with the post-soviet states raise serious issues of security. In 2003, Georgia threatened secession (the Rose Revolution) after Russia had, heavy-handedly, slapped an import ban on the importation of Georgian wine. Relations with the Ukraine deteriorated over its intention of seeking greater integration with the EU and NATO. Russia made it abundantly clear that such a move would force her to annex the territory outright and her position has not changed. Nor will it change in the future.

Russia’s tactics are far short of conventional invasion. Putin is well-versed in the methods of asymmetric warfare: paramilitary formations with no military insignia on their uniforms isolate poorly armed Ukrainian garrisons and cut them off from what is a chaotic, insecure civilian government in Kiev. But Russia does not want an all-out shooting war, she would prefer to calm things down in order to present a reasonable face to the west.

In recent days a few very influential Ukrainian oligarchs- rich industrial magnates centred in eastern Ukraine who like their Russian counterparts have huge investments in London and the EU- have been seeking dialogue with Putin. They are in favour of a Euro-Asian Economic Union comprising Belarus, Kazakhstan, Ukraine and Russia targeted for integration by 2015. It would be a Russian version of the EU, with the Ukraine remaining an independent country.

This plan may be the only realistic option open to Ukraine if it is to keep its sovereignty. There are, however, formidable obstacles to lasting success, such as the blood of history, Russia’s record of economic exploitation, and the emerging rivalry between the Ukrainian oligarchs and their Russian counterparts.

Whatever the shape of the solution to the Ukrainian debacle, Russia’s overriding concern will always remain her ability to maintain her defences and her standing as an economic superpower.