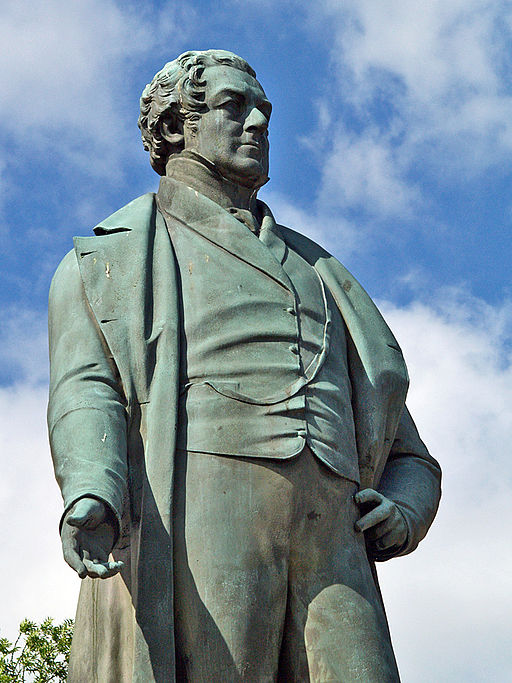 Born on 5th February 1788, Robert Peel was a wealthy cotton mill owner from Bury in Lancashire. He would go on to become one of the most influential men of his time, pushing through political policies that would help modernise society in years to come.

Educated at Harrow and the Oxford University, Robert Peel was fascinated by the idea of entering parliament, an ambition he achieved when, as a Tory, he began his parliamentary career in 1809.

It was not long before Peel was granted his first major political appointment, as under-secretary for war and the colonies, in 1809. In 1812 he was given the role of chief secretary for Ireland, and ten years later, in 1822, Peel was promoted to home secretary by Lord Wellington, the prime minister.

As home secretary, Peel introduced the changes that he was to become most well known for; his far-ranging criminal law and prison reforms. He also created the Metropolitan Police, and his policemen were affectionately known as ‘bobbies’ or ‘peelers’ in his honour.

When the Tory government came to an end in 1830, Peel found himself in opposition against the new Whig government led by Prime Minister, Earl Grey. However, after only four years, Earl Grey’s government was dismissed by William IV, who appointed Peel as the new prime minister.

In his Tamworth Manifesto, Peel outlined his support for the Reform Act that had been passed in 1832. This was a shift in his previous opposition of the Act, which saw the introduction of a more enlightened period of Conservatism. The less strict viewpoint of the Tories wasn’t popular, however, and they remained a minority in the House of Commons. Disillusioned by this, Peel resigned in 1835.

Six years later, in 1841, Peel formed a new Conservative administration, which was to oversee a number of major changes in the country’s legislation. These changes included the Mines Act of 1842, which forbade the employment of women and children underground and the Factory Act of 1844, which limited working hours for children and women in factories.

It was in 1845 that Sir Robert Peel attempted to improve the state of British agriculture by campaigning to repeal the Corn Laws, which would allow more land to be freed up to grow more food to help feed the people of Ireland, where a potato famine was raging.

Peel’s own party, which largely consisted of major landowner’s, refused to support him. It wasn’t until 1846 that, with support from the opposing Whig and Radical parties, the Corn Laws were repealed. Sadly, on the same day as Peel finally managed to get the Corn Laws repealed, he failed to have another bill reformed, and resigned in defeat.

Sir Robert Peel never returned to politics, and only four years later he died, on 2nd July 1850, after a fall from his horse.

Neuroeducation: Do findings from Neuroscience benefit learners?
A Beginner’s guide to Anthropology