If you want an example of how far a home study mathematics course can take you then take a look at the life and work of Sophie Germain.  She became a renowned mathematician who has, among other things, a group of prime numbers and a Paris hotel named after her. 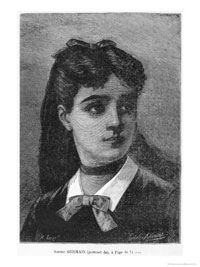 Sophie Germain was born in Paris in 1776. When she was 13 years old the Bastille fell and she was forced to spend long periods of time at home due to the dangers of being out and about in Paris during that period of French history. It is said that it was at this time she turned to her father’s library for entertainment and she soon became very interested in mathematics. Sophie loved to spend her time learning maths but her parents did not think that this was a suitable way for a young girl to pass her time and tried everything they could to discourage her. She was denied warm clothing and a fire in her room at night in an effort to stop her studying. In the morning they would find her asleep over her work, wrapped in blankets and with the remains of candles she had managed to smuggle into her room. Eventually they relented and some say her mother even encouraged her in her work.

Even once the political situation in France was a little more stable Germain was unable to pursue her studies in the traditional way as mathematics was still not considered to be a subject for women. She continued studying at home and entered into a kind of correspondence course with both Gauss and Legendre under a male pseudonym. Much of her work was on number theory and related to prime numbers. A special type of prime number is now named after her.