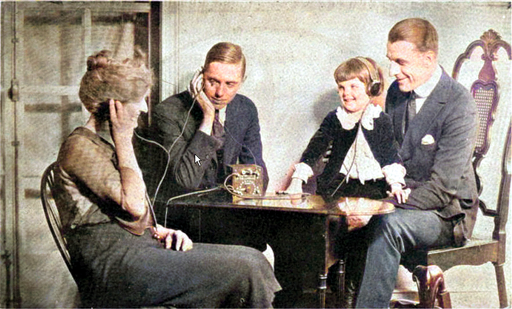 To mark World Radio Day on the 13th of February we take a brief look at the history of this important invention.

Radio works by changing sounds into waves, the existence of which were proven by German scientist Heinrich Hertz. After travelling through the air, the radio receiver changes the waves back into the original sounds.

Italian inventor Guglielmo Marconi is credited as the father of radio, having developed the idea in the 1890s. He successfully sent a Morse Code message over a 1 kilometer distance using waves in 1895, and in 1897 he was awarded a patent in England for his “wireless telegraph” machine (the device later becoming known as the radio). In the years prior to World War I, a number of communications companies began developing Marconi’s invention so that it could broadcast more than just Morse Code. By 1914, Canadian inventor Reginald Fessenden managed to develop a machine that could sustain a wave powerful enough to transmit voices and music over thousands of miles. The system also quickly became utilised by the military.

By the early 1920s, radio had become the most popular means of communication and hundreds of stations, which broadcast one-way transmissions, were established, broadcasting news, sports events, music, educational programmes and variety shows. By the 1930s most households in Europe and the US owned a radio, and it was common for families to gather around in the evenings to listen to their favourite shows. It also became a vital lifeline for people, and propaganda tool for politicians, during World War II. This time period became known as the Golden Age of the medium and marked the foundation of a number of broadcasting companies including the BBC, NBC and CBS.

Whilst radio’s importance has diminished somewhat since its Golden Age, largely due to the invention of television, it remains an incredibly importance source of news and entertainment for people globally. The UN claims that, on any given day, an estimated 44,000 stations broadcast to over 5 billion people worldwide. To highlight the importance of the radio, UNESCO proclaimed the 13th of February as World Radio Day in 2011 and, a year later, the UN adopted it as an international day.

Christmas Costs
Exams: Are They About To Change?