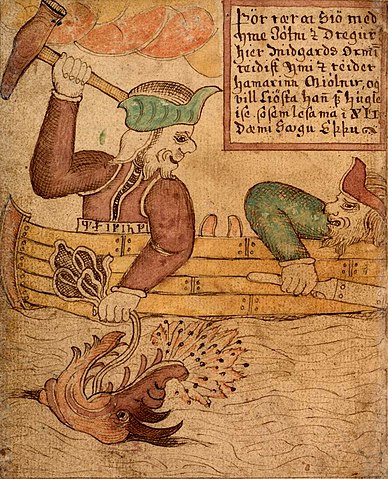 Myths Of The Sea Serpent

The 7th of August is, in some parts of the world, Sea Serpent Day. So let’s delve into a few myths and tales about these legendary creatures.

With around 350 miles of coastline, Essex is brimming with tales of sea serpents. One legend tells of a dragon that emerged from a lake near the village of Bures to terrorise the locals, while another nearby village, Wormingford, is also named after just such a creature – the Medieval word for serpent or dragon is “wyrm”. One version of the Essex Serpent legend describes how a crocodile, which was given to King Richard I, escaped the Tower of London and supposedly demanded to be fed virgins. This tale is depicted in a 1950s stained-glass window in Wormingford’s church.

In Norse mythology, The Midgard Serpent, also known as Jormundgandr, which translates as “Great Beast”, is a giant snake that lives in the ocean surrounding Midgard (the physical world around us). The myth tells that Jormundgandr grew so large that he encircled the whole of Midgard, trapping all within his coils, and that as a result the serpent came to represent Fate or Destiny – that which no man or god can escape. The Midgard Serpent is the child of Loki and the giantess “Mother of Monsters” Angrboda, and the myth tells that Thor and Jormundgandr were fated to kill each other at Ragnarok (The image above is an Icelandic depiction of Thor attempting to catch the monster). Legend has it that Thor did indeed kill the serpent but died shortly afterwards having been poisoned by its venom.

In Greek mythology, Cetus was a large sea monster, fish, or whale who most famously makes an appearance in the tales of Perseus. The story goes that Cassiopeia, Queen of Aethiopia, boasted that her daughter, Andromeda, was more beautiful than the Halia sea nymphs. Poseidon, who treasured the nymphs, was outraged at Cassiopeia’s insolence and sent Cetus to destroy the shores of Aethiopia. Cassiopeia and her husband consulted an oracle who informed them that they must sacrifice their daughter to the sea monster to please Poseidon. And so they did, chaining Andromeda to the rocks by the sea. Fortunately, Perseus appeared, setting Andromeda free and slaying Cetus using either his sword or the head of the gorgon Medusa, which turned the serpent to stone.

According to Scottish folklore the Cìrein-Cròin was the largest living creature known to man – it was capable of eating seven whales. The myth also states that only the devil himself could slay the monster. The Cìrein-Cròin was described as a gigantic sea serpent which had the ability to shapeshift. It would turn itself into a small fish and let itself be caught by fishermen before returning to its true form to eat the unsuspecting men.

In Greek mythology, the Hydra (which means “water snake”) was a serpent with numerous heads. It was a child of Typhoeus and Echidna: the same monsters who spawned Cerberus (the three-headed dog that guarded the underworld) and the chimera (a fire-breathing monster with a lion’s head, goat’s body and snake’s tail). According to myth, the heads of the Hydra were regenerative and two would grow back for every one that was cut off. The Hydra lived in the swamps of Lerna in Greece until it was destroyed by Heracles as part of his famous twelve labours. With help from his cousin Iolaus, Heracles managed to cauterise the severed necks of the Hydra each time he chopped a head off, preventing the heads from regrowing. It was said that the breath and blood of the hydra was poisonous and so, after slaying the monster, Heracles dipped his arrows in the poison blood for future use against his enemies.

Journaling To Improve Study
What Is Cultural Diversity And Why Does It Matter?