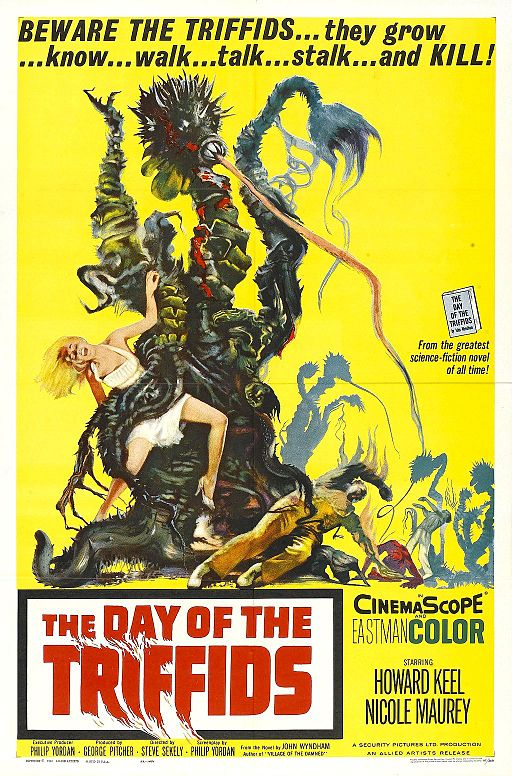 John Wyndham: Sowing the seeds of an Everyday Apocalypse

In May 2015, a previously unnamed lane in North West London was officially given the name ‘Triffid Alley,’ paying tribute to its resemblance to the alleyway through which Bill Mason, hero of The Day of the Triffids, escapes the eponymous carnivorous blooms. This, argued his biographer David Ketterer, is no more than its author, John Wyndham, deserves. Although both prolific and successful, Wyndham never gained in his lifetime the recognition that many fans feel his work merited.

Like most science fiction writers of his generation and before, Wyndham initially made his living selling short stories to American ‘Pulp’ magazines. It was only after WWII, in which Wyndham served both the civil service and the army, that he wrote his most famous novel, The Day of the Triffids. It was an instant success and enjoys enduring popularity. He went on to write three more novels in the 1950s, which along with Triffids, continue to be his most well known: The Kraken Wakes, The Chrysalids and The Midwich Cuckoos.

Some critics have criticised Wyndham for his rather ordinary, 1950s middle class settings; fellow science fiction author Brian Aldiss once labelled Wyndham’s work ‘cosy catastrophes.’ It is true that some of his novels are set in an ordinary British society that is instantly recognisable to many readers. The Day of the Triffids is set in a London that would have been, and in many ways still is, unmistakably familiar. Likewise, The Midwich Cuckoos takes place in a commonplace English country village.

However, Wyndham’s very genius is to make the most ordinary settings extraordinary. Wyndham coined his work ‘logical fantasy,’ and this seems an appropriate phrase. Novels such as Triffids and Cuckoos are designed to allow the reader to identify with the setting, then render it terrifying by a single out of place detail; for example the blindness afflicted on most of the human population in Triffids.

Like most good writers of science fiction, Wyndham’s work has had a great influence on today’s fantasy and sci-fi culture. The Day of the Triffids can be seen as a forerunner of the Zombie apocalypse stories, movies and TV series that are so popular in the 21st century. Like the zombies, the Triffids are rather slow moving, with many weaknesses in terms of their ability to ‘hunt’ humans. Yet the sheer weight of their numbers, and the frailties of the surviving humans, is what both have in common and what leads to their success. The Kraken Wakes, on the other hand, bears a great resemblance to modern versions of the alien invasion story, such as the TV series Extant and even the film Prometheus.

Although Wyndham’s work can feel dated in some ways, the themes that he addresses are universal and timeless. His post-apocalyptic dystopian novel The Chrysalids portrays a future society in which certain members of an isolated community are persecuted for their differences by religious extremists. It is clearly the work of a man who had lived through civilisation’s greatest battle against fascism, and has lasting relevance today.

Do the Grammar Nazis have a point?
How the Internet Revolutionised Learning