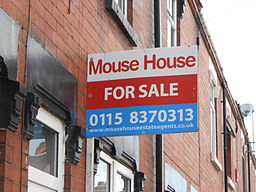 Since the beginning of the financial crisis in 2009, UK interest rates have fallen to an all-time low, averaging 0.5% and eroding the value of past savings, discouraging future savings and reducing the value of pension funds, Low interest rates remain part of the government’s package of monetary measures designed to boost manufacturing investment, consumer spending and economic growth.

But record low interest rates have not produced any dramatic or long term solutions to low levels of innovative investment, or any solid increase in competitiveness and productivity. Unemployment rates have declined substantially, but jobs remain insecure and low paid. Approximately 6% of the long term unemployed remain out of work.

What has happened over the last two years is that house prices have risen on the back of persistent and growing demand, coupled with sluggish increases in supply. In an era of exceptionally low interest rates, house purchase, either to let or buy, becomes a very attractive alternative to cash savings, both for the individual and for mortgage firms, when low interest rates represent a low risk of default. The government’s help-to-buy initiative also cushions the banks from a portion of mortgage default in the event of their mortgage client’s inability to meet rising mortgage costs in the future.

But demand for houses (accommodation would be a better term) is simply not being met. Over the last 6 months we have seen a rapid rise in house prices (on average a rise of 12%) and a corresponding rise in the mortgage debt as a percentage of household income of 14% with over 2 million low income families taking on mortgages which they are unlikely to be able to pay once interest rates rise to 3.5% or 6% by 2016. A rise in repossession and a sudden fall in house prices will see a re-run of the past boom and bust cycle, typical of the British economy since the 1960’s.

A new build target of 150,000 new homes per year is quite insufficient to satisfy current demand, even if this target can actually be achieved within only a year. One solution to the chronic lack of housing is to build prefabricated dwellings on factory sites, which are then transported to the building site. This would vastly increase housing supply, at a fraction of the cost of traditional construction, therefore reducing the amount of mortgage needed to get on the property ladder and reducing the spectre of repossession once interest rates rise.

The use of monetary measures alone to fine-tune the housing market merely tinkers with the problem – like moving the deck chairs on the Titanic. We need to actually boost supply by building more houses and reforming the tax arrangements on property over and above a market price of £250,000.

Economic Problems: Negative Interest Rates and Deflation
The Chancellor, The Prime Minister and a Game of Football