The Chancellor, The Prime Minister and a Game of Football 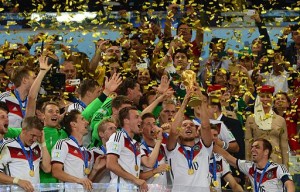 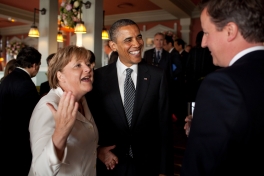 Both our countries did better than England, David!

Napoleon was once asked what quality he most valued in his marshals. “Luck,” he replied. The same quality is vital for successful politicians. To feel lucky is to project confidence and advertise success. It contributes to the feeling of well-being in a nation. In this sense, Angela Merkel is  plainly lucky: she is currently looking radiant, basking in the reflected glory of “her boys” double triumph at the World Cup in Brazil – thrashing hosts Brazil 7-1 and then clinching victory with a last gasp goal against Argentina in the final. It does her no harm at all that this sporting triumph seems to mirror her nation’s core values of hard, effective work and professionalism.

David Cameron, on the other hand, is plainly not so lucky; no triumphant PR photo-opportunities for him. England’s elimination after 5 days of the month long tournament only produced a muted apology from the players, followed by media oblivion.

An average of two million tweets per day were sent over a 32 day period during the tournament, and a lot of them were favourable comments on Germany for their performances in the games against Brazil and Argentina. The German football team has given the German Chancellor world-wide coverage. She will get more as the Berlin crowds gather to welcome their team back at the Brandenburg Gate and the Unter den Linden. The whole of Germany is in a happy, festive mood. Mass euphoria of this degree consolidates not only her standing in the country, but also in the councils of Europe and the wider world.

All this feel-good factor is denied David Cameron, facing the nightmare of the vote for Scottish independence, an election in 10 months’ time, and an in /out decision over Europe. But the greater truth is that it is not so much that Mrs Merkel is lucky, rather it is the solid hard work, professionalism and common sense manifest in German society and in her economic performance that has created a feeling of well-being and contentment in contemporary Germany. She is able to capitalise on this and consolidate her position.

David Cameron, meanwhile, is left re-shuffling a bunch of stale, middle class males with pretentious ego’s before the election in a bid to revitalise a deeply cynical electorate. Grossly unfair, of course, but that is the brutality of politics in a society unsure of the future and dissatisfied with itself.