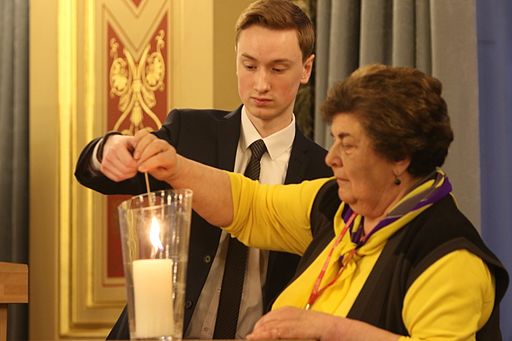 Since 2001, Holocaust Memorial Day (HMD) has taken place in the UK, on 27th January. Run by the Holocaust Memorial Day Trust charity, this special event raises questions, provides support, and continues to challenge communities and nations about the aftermath of the Holocaust and genocide.On a simpler level it also works to recognise all those men, women, and children who survived, as well as all those who didn’t.

During the Second World War, between 1941 and 1945, the Nazis attempted to annihilate all of Europe’s Jews. This systematic attempt to extinguish the Jews would be known as the Holocaust. Beginning by using clever propaganda as early as 1933, the Nazis slow denial of Jewish human rights, which culminated in the evil of concentration death camps, formed a horror that should never be forgotten. So it was that the 27th January was chosen to be HMD; it marks the day when the largest Nazi death camp, Auschwitz-Birkenau, was finally liberated.
It isn’t just the horrors of the Holocaust that are remembered on HMD, however, but also the mass murders of communities in Rwanda, Cambodia, Bosnia and Darfur that have happened since the last World War.

Each year the Trust asks a different question or addresses a new theme to help commemorate Holocaust Memorial Day. In 2017 the theme is ‘How can life go on after genocide?’ This difficult question will lead to wide discussion, and is guaranteed to do precisely what it should- make us all stop and think about genocide, and why it should never be allowed to happen again.

The HMD Trust reminds us that genocide and holocausts don’t just happen. Their roots are fostered and tended within racism, discrimination and hate.
In 2017, the Holocaust Memorial Trust is asking us all to think about what happens after genocide, and about our own responsibilities in the wake of crimes that go beyond the understanding of most of us.

For more information about this year’s Holocaust Memorial Day, and to see what activities are taking place near you, visit- http://hmd.org.uk/page/about-hmdt