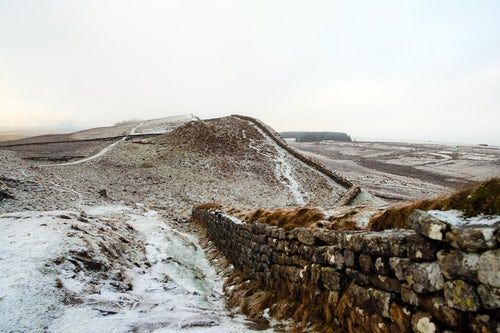 Was Hadrian’s Wall the first divide between England and Scotland?

Scotland and England are geographically and politically connected as two parts of the United Kingdom. It is partly because of this that for hundreds of years, rivalry and divisions between the two countries have existed. One of the earliest physical divides between the two adjoining countries is popularly believed to have been Hadrian’s Wall.

Built on the orders of the Roman Emperor Hadrian, who came to visit Britain in AD 122, this epic construction is frequently cited as being used to keep the lawless barbarians of Scotland (the Picts) out of England after the Romans failed to tame them. This belief has never been true, and yet it continues to loom large in the consciousness of Britain.

In reality, Hadrian’s Wall never formed any part of the border between England and Scotland; nor could it have. At the time of its six year long construction, the kingdoms we recognise as England and Scotland did not exist. The wall was intended, not to hold back the Scots, but to mark the northern-most frontier of the Roman Empire. It was a frontier which spread, at its greatest extent in the 2nd century AD, over 5,000 km. There remain similarly visible parts of ancient demarcation across Europe, parts of the middle east and north Africa.

Emperor Hadrian didn’t choose the 74 mile long path of his wall at random.

On his arrival in Britain there was already a line of forts following a Roman road called Stanegate. Research from English Heritage has shown that Hadrian’s Wall was built by three different Roman legions. These were the II Augusta, based in Caerleon in South Wales, the VI Victrix from York and the XX Valeria Victrix from Chester. Made from a continuous curtain wall of stone and turf, Hadrian’s Wall was accompanied by a series of supporting ditches, turrets, miniature forts (known as fortlets or mile castles) and occasional large forts. These forts and fortlets along the wall were interlinked with the existing Roman road. Then, parallel to the wall and road, was a vast ditch that ran the entire 74 miles, called the Vallum.

All told, this shows that in fact, if Hadrian’s Wall had formed the line between England and Scotland, then Scotland would now begin much further south. The border divide would cross through parts of Cumbria and much of Northumberland.

Twenty years after the construction of Hadrian’s Wall, Emperor Antoninus Pius ordered an advance beyond it, up into the very north of Britain. This time it ran very much into what we know as Scotland. Having conquered large areas of land, in c.AD 138, Pius sanctioned the building of the Antonine Wall, intending to establish a new northern frontier of the Empire between what are now the Firths of Forth and Clyde. Unlike Hadrian’s Wall however, the Antonine was never finished, and the most northern marker of the Empire remained Hadrian’s Wall. It remained in use until around 400 AD. Then, after the Roman Army withdrew from Britain, it began to be used as quarry material to build local homes.

The Political divide between England and Scotland may well be entrenched in the UK’s past, but although we often think of Hadrian’s Wall as being an early symbol of that division, that is not the case. We have to move forward through history to find its true starting point.

Summer Holidays and Personal Development
Are Language Subjects In Crisis?