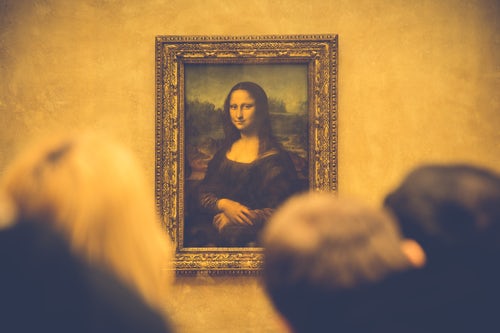 The year 2019 marks the 500th anniversary of the death of Leonardo da Vinci. Unquestionably the possessor of one of the greatest, most inquisitive minds of the Renaissance, if not of all time. Known for his artwork, inventions, engineering prowess and architectural skills, his fame continues to withstand the test of time.

A Fast Rise to Fame

Born in the Tuscan region of Italy on 15th April 1452, near the town of Vinci, he was sent to Florence at the age of fourteen to be an apprentice to the sculptor and painter Andrea del Verrocchio. During his time here, Leonardo worked with, and was influenced by, some of the artists who were to join him in becoming the most renowned of the Renaissance, including Botticelli. Aged just 26, Leonardo was so skilled in his craft that he became a master in his own right.

After years of working in and around Florence, in c.1483, da Vinci was employed by the Sforza family. The Sforzas were the ruling family of Milan and he worked for them as an engineer, sculptor, painter and architect. It was while he was in Milan that Leonardo produced a mural of ‘The Last Supper‘. It shows Jesus and his disciples dining around a table just prior to Christ’s arrest and crucifixion. This painting, which appears in the refectory of the Monastery of Santa Maria delle Grazie, took two years to produce, between 1495 and 1497.

His work with the Sforzas came to an abrupt end in 1499. In that year Milan was invaded by the French, and the family was forced to flee. Returning to Florence, Leonardo painted what would become his most famous work, the ‘Mona Lisa‘, between 1503 and 1506. His passion for art is encompassed in his own words, “Painting is poetry that is seen rather than felt, and poetry is painting that is felt rather than seen.”

An Artist Ahead of his Time

It wasn’t just art that occupied Leonardo’s mind. He was fascinated by the world around him and kept hundreds of notebooks filled with notes and drawings. The subjects were as diverse as anatomy (at the time, his anatomical drawings of the human body were the most accurate ever produced), geology, the concept of gravity, botany, weaponry and optics. He is also famed for having sketched designs for bicycles, helicopters and parachutes 400 odd years before they were invented. To safeguard his ideas from other inventors, Leonardo often wrote in a left-handed mirror script. He had an endless capacity for learning, and is noted for saying, “The noblest pleasure is the joy of understanding.”

Da Vinci returned to Milan in 1506, where he remained until 1513, after which he moved to Rome. In October 1515, King Francis I of France recaptured Milan and in 1516 he granted Leonardo the honour of being the entitled the “Premier architect, artist and mechanic to the king.” Entering King Francis’ service, Leonardo moved into a house near his Fontainebleau court. It is widely believed that it was here that da Vinci completed his final painting, St. John the Baptist.
In 1517 Leonardo moved to the Château of Cloux, near Amboise in France, where he died on 2 May 1519.

Da Vinci is rightly famed for his surviving works of art. However, it was his genius and inquisitive mind that will remain a source of wonderment and admiration for future generations. His scientific understanding of the human body has helped the progress of medicine and biological knowledge, whilst his tackling of engineering and architectural problems, and his futuristic thinking had a massive impact on the world in which he lived, and continues to have positive influence today.

Exhibitions and events to celebrate the anniversary of this great man’s life and work are taking place across Europe. For example, in the Louvre in Paris (which holds the biggest collection of Da Vinci’s work, including the Mona Lisa) is expecting huge crowds for its exhibition, which opens in October. In the UK an exhibition called Leonardo da Vinci: A Life in Drawing, will be open to visitors until 13 October in The Queen’s Gallery in Buckingham Palace (There is a link to the exhibition website below). This exhibition, featuring 200 drawings, will then travel to The Queen’s Gallery in Edinburgh, and go back on display there.

How Salvador Dali Brought Modern Art To The Masses
Was The Treaty of Versailles a Flawed One?