The Breaking of the German Armies 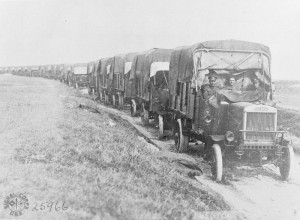 Allied troops cross The Hindenburg Line after Victory in 1918

The last engagements of the First World War began in July 1918 with the Second Battle of the Marne, and were characterised by the application of overwhelming force in a series of coordinated, strategic attacks made by French, American, Commonwealth and British troops, which simply could not be matched by German manpower. These last battles were supported by tanks used in mass formations and by aircraft. This, at last, was war of movement and a breakout from trench warfare.

In the joint French and American attack along the Marne front, the French took 8,000 prisoners and 145 artillery pieces for the loss of 5,000 men. The number of prisoners taken together with their guns also indicated a serious loss of morale amongst the front line German troops. By August 1918, the Germans were forced to abandon Soissons and fall back to the Aisne and Vesle rivers, with the loss of 168,000 men, including some of their best storm trooper units.

From August 8 – 12th, general Haig launched the Amiens offensive, aiming to clear the railway lines running from Amiens to Paris, which had been held by the Germans since March. The Anglo-French attack was overwhelmingly successful, with allied armies advancing some 16km. German front line units simply abandoned their positions and the rest put up little resistance. Around 15,000 prisoners were taken here. The German General Ludendorff called the 8th August “the blackest day of the German army.” Further attacks by American troops ensured the railway was reopened. In all, the Germans lost 40,000 men, with a further 30,000 taken prisoner.

On 30th August, the American General Pershing launched an attack with fresh troops along the Meuse river, supported by the French. The Germans then faced repeated attacks along the Somme front from Anglo-French and New Zealand Divisions. By early September, German troops were retreating to the Hindenburg Line. Though the momentum of the allies’ attack had to be halted on September 10th due to a lack of reserves, battle fatigue and losses of 42,000, the German losses were far greater once more: 100,000 were killed and a further 30,000 taken prisoner. On 12th September the American Expeditionary Force, along with the French Colonial Corps, attacked Verdun, supported again by tanks and aircraft. And once again, German troops were forced to withdraw.

On October 3rd, the Americans launched the Meuse-Argonne Offensive, driving the Germans from the Hindenburg Line and advancing to within 3 miles of Cambrai. By the end of the month the German armies had been pushed back across the river Scheldt.

The final phase of the German defeat began in November, with resistance collapsing across the entire front. Finally, it all ended on November 11th with the signing of the armistice and unconditional surrender. So began the “stab in the back” myth and the planting of the seeds of World War Two.

Opinion: Setting in Schools
In Flanders Fields the Poppies Blow