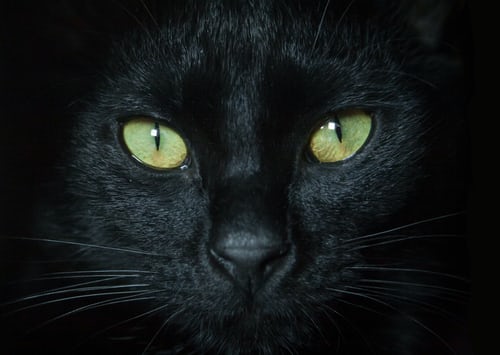 When you think of black cats, images of Halloween and witchcraft come to mind, and history certainly plays a role in this. Across medieval Europe, black cats were associated with superstition and bad luck, yet no one really knows why this was.

In some cultures, these graceful and curious animals are considered good luck; in Japan they are a symbol of prosperity, and the ancient Egyptians worshipped the black cat. To them, black cats were representations of the goddess Bastet, the protector of women and households, goddess of women’s secrets, fertility and childbirth.

Anyone who has owned or cared for a black cat will know they make loving and curious pets. But how has history portrayed them in TV, film and literature? Here are 4 famous black cats we’ve to have made their mark.

Perhaps one of the most well-known black cats in film history, Felix is a loveable feline character who first appeared in a children’s comedy cartoon created in 1919, by Pat Sullivan and Otto Messmer during the silent film era. He is a black cat with human traits expressed through his white eyes and a huge and infectious smile. Felix was generally always portrayed as mischievous, but good-hearted, and willing to help. He embodied the feline spirit, with a certain mystical side, showing resourcefulness, independence and a steely determination to address challenges that came his way.

Salem is an American Shorthair cat,  or rather, a 500-year-old wizard trapped in a cat’s body, and first appeared in part one of the Archie Mad House comics series Sabrina The Teenage Witch in October 1962. He is probably better known as a character in the TV series of the same name that ran from 1996 – 2003, and most recently from Netflix’ incarnation, Chilling Adventuress of Sabrina. Salem has two sides; he can be selfish and power-hungry, and enjoys scheming to get his own way, causing trouble and – less noticeably in the Chilling version – seeking world domination. But he also has a big heart and softer side, one he showed occasionally during his broadcast TV appearances, particularly for Sabrina, who he secretly called ‘Sabereeny’.

A mystical black cat with a white chest, Mr Mistoffelees featured in T. S. Eliot’s 1939 poetry book Old Possum’s Book of Practical Cats and its 1981 musical adaptation, Andrew Lloyd Webber’s Cats. He is a cat with special gifts and magical powers, including the ability to conjure up objects and even other cats. Described as being a clever conjuring cat, he is often found getting up to mischief or performing amusing tricks. Mistoffelees also has a competitive streak and is a bit of a show-off.

Behemoth is an enormous demonic black cat who has human qualities and a sarcastic streak. He walks on two legs and can even transform to human shape for brief periods. Behemoth is known for his jokes which he delights in sharing. He is a character from the novel The Master and Margarita by the Russian writer Mikhail Bulgakov. Quite a character and free spirit, he’s partial to vodka, chess and pistols.

A common theme for black cats depicted in TV and film is their portrayal as having human-like qualities and spirited characters, heroic with strongly mystical inclinations. They also have an equally gentle and protective side.

Sunday Roast – A Tasty History
Tutor – Student Study Time: How To Maximise It